For farmers who are interested in growing a different break crop, perhaps ES Bella sunflowers should be considered. Wilson Hendry of Grainseed, who market this variety, says that the average yield in Europe is approximately 2.5 t/hectare, but yields can exceed 4 t/ha.  “Climate change with rising heat units will enable more areas of the UK to reconsider sunflower seed production. Realistically I would expect yields to average 1.5 to 2.5 t/ha in the UK,” he says. Independent agronomist Richard Alcock who advises farmers in Somerset, Wiltshire, Dorset, and Devon has looked after several crops of sunflowers and says the average yield his clients are achieving now is 2.5 t/ha.

Mr Alcock says that some customers who have grown weary of oilseed rape may want to try sunflowers. He points out that most sunflower seed used in wild bird seed mixtures for bird tables is currently imported.

Mr Alcock’s customers purchased their Es Bella seed from Hubbard Seeds and the seed is packed in 150,000 seed units and treated with fungicide to prevent damping off and seedling blight and ensure good establishment. Wilson Hendry says that Es Bella is a short (around 150 cms tall), simple hybrid with high yield potential, high yield stability and regular plants with half erect pendulous heads.  “Bella has good disease resistance to head Sclerotinia, collar Sclerotinia, Marcophomina, Alternaria, rust and Verticillium. It also shows good early vigour and is highly resistant to lodging.”

The suggested seed rate for sunflowers in the UK is 110,000 seeds/hectare, to achieve a population of 90,000 to 100,000 plants/ha on a 25 -35 cms row width.  “This plant population is higher than used on the continent because it ensures that plants will produce small heads which dry down quicker at harvest. Sunflowers prefer an open sunny site and large fields, so bird damage is limited to the headlands only. The crop can be grown on almost any soil type, apart from low pH soils. The optimum soil pH is 6 to 7.5. Sunflowers like potash rich clay soils and clay loam soils and will do well in dry, sandy soils in areas of low rainfall,” according to Wilson Hendry. 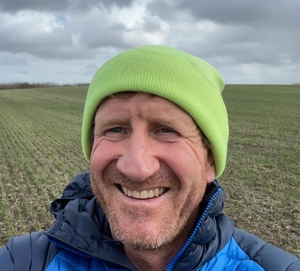 Sunflowers should be drilled between 15 April and the beginning of May into a warm seedbed when soil temperatures at 5cms deep average 7°C.  “I advise growers to get the ground prepared early. This year the soil temperature is too low for early drilling,” says Mr Alcock and he has advised his farmers to delay until the last week of April this year when soil temperatures will have risen. Seedbeds need to have moisture at 3-5 cms depth. Precision drills have improved plant spacings along the row and this ensures evenness of maturity at harvest.

In terms of variable inputs, sunflowers require low fertiliser requirements, no more than 25- 50 kgs of Nitrogen pre-emergence. If the field is sprayed off with glyphosate (Roundup) before drilling, additional weed control may not be necessary. If grown on a weedy site, pendimethalin (Stomp Aqua) can be applied pre-emergence to provide residual weed activity. Aclonifer (Emerger) has as an EAMU for broad leaved weed control pre-emergence. Post emergence fluazifop-b-butyl (Fusilade) or clethodim (Centurion Max) also have EAMU’s for black-grass control.

Sunflowers should not be grown closer than 1 in 4 years rotation to prevent build-up of diseases in the soil. Botrytis or grey mould and Sclerotinia or head rot can infect the back of the seed head at harvest. Both diseases are favoured by mild, wet conditions and are seed borne, hence the 1 in 4 rotation. Growing an early maturing variety such as Es Bella means harvest can take place before these diseases become a problem. Bella has a good disease resistance package.

During establishment slugs can be a problem and may need pelleting if it is damp and favourable for their activity.

Harvesting occurs when seed moisture is at 15 to 20°C, normally in the middle of September through to early October.  Mr Alcock says that combining is probably the most challenging aspect of growing sunflowers. The combine should be adjusted according to manufacturer’s instructions and tines on the reel removed or covered to prevent impaling the heads. Combining aims to cut all the heads and leave as much stalk as possible which can be disced in after combining. The seed can be dried on a cold air-drying floor down to 15% moisture.

Drying down to 9% for long term safe storage and marketing can be done using low volumes of heat, like oilseed rape. The lint layer surrounding the seed can be rubbed off in the drying process. The drier should be monitored whilst seed is being dried.

Most UK production goes into bird seed for which there is an increasing demand in the UK. Seed should contain 44% oil content, 9% moisture, no more than 2% admixture and 2% hulled seed. Suppliers of sunflower seed are keen to buy British, because of complications of importing seed from the continent into Europe following Brexit.  Richard also says that there is some facility to crush the seed for oil and if the cropping area increases this can be expanded further and logistics improved consequently.

Mr Alcock says that the crop has an aesthetic benefit of being so beautiful to look at. “We have seen people stop to have a better look at the crop in flower. But it also a serious viable alternative break crop, with a price of around £450/tonne. I am advising growers to try a small area to start with to experience the full growing season first before upscaling.”