Selected conventional varieties also exhibit the good early vigour that will enable them to grow past the potential damage that can be done by cabbage stem flea beetle, says Liam Wilkinson technical oilseed rape specialist, for plant breeders Limagrain UK.

Conventional rape varieties account for 35 – 40% of all crops, a smaller proportion of the national crop than for some time, he adds.

“They have ceded the majority of the market to hybrids, which traditionally offer greater vigour and the opportunity to ‘stack’ beneficial traits such as resistance to pod shatter and disease.”

Amongst Limagrain’s conventional varieties both Acacia and Amarone show similar characteristics, he notes.

“Growers are looking for vigorous growth in the autumn and to establish a canopy as quickly as possible so the crop gets away from the adult beetles.”

“Both Acacia and Amarone have good initial vigour, they quickly establish the three or four true leaves they need to reduce the risk from grazing damage by the adult CSFB.”

“With new conventionals Annika and Amarone also offering TuYV resistance, they can to help form the basis of an IPM strategy or those looking to reduce reliance on autumn insecticides.”

“They go on in the spring to reach eight true leaves and around 8cm collar with a 15cm tap root quickly, which helps protect them against larval damage”.

“One key to helping all oilseeds avoid damage is to drill according to moisture levels rather than the calendar,” he adds.

“Drill for the soil conditions – you must have enough moisture to get the plants off to a good start, so they can get going and keep going.”

“That’s not the be all and end all of it, because the beetle and their larvae still pose a risk. But hitting these growth thresholds gives the crop the best chance of withstanding any damage.”

Two farmers who continue to grow conventional varieties are Tim Parton, a well-known advocate for regenerative agriculture, based in South Staffordshire, and Andy Roberts, who farms on the Staffordshire/Shropshire border.

That blend includes Acacia and Annika and he saves his own seed so the mixture he sows is progressively better adapted to his farm:

“By combining several varieties I get stronger disease resistance which helps keep costs down. At the same time, those three varieties are adapting to my farm’s soil and conditions.”

“When they are senescing they send endophytes into the seeds that are ready to be sown into the environment they have been grown in, which improves plant genes for the future.”

They fit into a six year rotation alongside milling wheat, spring barley, spring beans, lupins and grass leys used for making haylage. cover crops are put in ahead of all spring crops and grazed by sheep – or ‘mobile composting units’ as Tim calls them.

He aims to direct drill the crop with a companion crop in the first week of September, and uses a high seed rate to achieve 100 plants/m2.

The companion crop is normally a mixture of crimson, white and burseem clover. He also adds molybdenum, sulphur, boron and manganese in the seedbed:

“The young plants will synthesise sugars and will not be attracting flea beetles”.

Total N supplied is around 170kgs/ha, much of that being supplied as foliar applications in response to the results of frequent tissue and sap testing.

Average yields have been around 5t/ha over the years, although cold springs have reduced that in recent years. 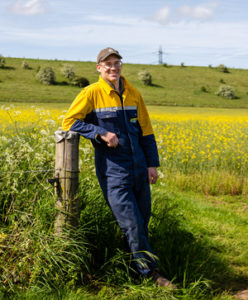 On the Staffordshire/Shropshire border Andy Roberts grows oilseeds in a rotation formed around winter wheat and spring barley, with breaks of either oilseed or potatoes.

Across much of the farm oilseeds are grown one year in six; in areas not suitable for potatoes it may be as frequent as one year in four.

This year he sowed over a wider window than normal – from mid-August to the first week of September – working the land with a Sumo Trio and broadcasting the seed off the back so the following roller pressed the seed to achieve good soil-to-seed contact.

In some fields he spreads chicken muck before sowing, working it in with a Vaderstad Carrier, to add both organic matter and nutrients to their mainly sandy loam soils.

Seed rates depend on sowing date: “We are sowing earlier these days to avoid flea beetle damage. We sow 60 – 70 seeds/sq m in mid-August and raise that to 80 seeds/sq m in September.

“We grow Acacia because we have always used conventionals as they tend to be a bit shorter stemmed, and have good standing ability which makes them easier to harvest.We don’t save seed at the moment, but it is useful to have that option should we want it.”

Yields on the farm tend to average around 4t/ha, although last autumn one September-sown field topped 5t/ha.

Rising fertilizer prices are forcing a change in his regime this year:

“On fields that have received a dose of chicken muck we don’t use anything in the autumn; where muck has not been applied we use 30kgs/ha at planting.

“We believe the crop needs some help to get it way from the flea beetle threat.”

Annika is well suited to early drilling and has excellent disease resistance, including genetic resistance to Turnip Yellows Virus. It produces a short plant with a stiff stem (scoring 9 for both lodging resistance and stem stiffness) and offers high yield potential (45.3% oil).

Acacia is the highest-yielding conventional variety on the AHDB 2021/22 recommended list. It has highly vigorous, robust plants with good stem strength and disease resistance. It rates 8 for lodging resistance; 9 for stem stiffness (45.7% oil).