The success of cover cropping is well documented to include correct species choice and establishment timing. However of equal importance is how best to terminate the cover crops.

How do I terminate my catch/intercrop?

“These covers may have been drilled in the early summer and be of good height. Grazing or mowing can be used to manage top growth. The majority will contain soft, lush growth with limited height, and termination timing is often driven by soil moisture. Leaving these in the ground for too long can over-dry soils.

“Most drills will be capable of drilling straight into these covers as the roots anchor the top growth, allowing clean movement through them.”

“Try and avoid the temptation to incorporate the cover, this can often make it problematic to drill. Treatment with Glyphosate/Kyleo should occur 3-4 days before drilling.”

Can I graze my cover?

“Yes, this is a fantastic way to manage the biomass, improve nutrient cycling and inoculate soil with bacteria. It will also reduce the potential N lock up from high C:N species such as cereals. “

Be wary if there are large quantities of buckwheat in the mix,” says Miss Cannon.

Grazing management is vital to success, especially on heavy land, she notes. “The aim is to graze 60% and trample the remaining cover promoting exudate and nutrient release. Covers should be mob grazed (high numbers on a small area of land, moved every few days). “

“Lighter land is more forgiving and will allow a more relaxed approach if that is preferred.”

When should I terminate my cover?

“Clay based soils are wetter, therefore moisture management is critical. They should be terminated by the end of November. This allows the moisture that will have been drawn around the root ball to dissipate back through the soil while sun and wind dry the surface.” 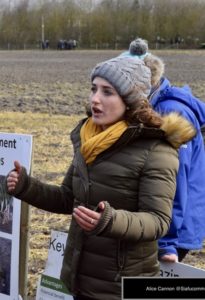 “Leaving the cover over winter will encourage water to be drawn to the surface meaning the working zone will be wet when it comes to drilling and the drill may struggle to cover the slot.”

“Light soils are less problematic and can be terminated at any time so long as following crop issues have been addressed.

How does my following crop affect termination?

This depends on the cover type, she says.

“Where the cover is ploughed down, this is obviously less of an issue but arguably negates the value of the cover. However, this may be needed where following crops cannot cope with the residue (Sugar beet/potatoes). “

Can I drill on the green?

“Quite possibly…you do not always need a new strip or direct drill to drill into a cover.”

“The success of direct drilling is down to biomass management and therefore will be down to initial species choice. White mustard for example produces long woody stems post winter that degrade very slowly and therefore wrap around tines. Legume based covers however are usually much easier for most machines to handle. It is always worth trying your drill dry to see how it performs.”

“Crimping is ideal for protecting soils against moisture loss, erosion, and weeds, but relies on hard frosts to be an effective alternative to glyphosate – which seemingly we very seldom get,” says Miss Cannon.