Yellow rust in particular is again causing concerns following reports of outbreaks in an unusually high number of varieties across some parts of northern England and Scotland during March, regional technical manager Cam Murray says.

Coastal regions of Fife, Lothians and Northumberland appear to be particular hotspots. “Crops closer to the coast always tend to be at greater yellow rust risk, but what concerns us is its prevalence in several different varieties, including those where you wouldn’t expect it to be an issue.

“We’ve therefore collected some samples and sent them for analysis to determine whether it could be due to the emergence of a new race.”

The most common races in 2020 were from the “Red” group, with the main ones being Red 37 and Red 28, with five new pathotypes identified, two in KWS Siskin, and one each in KWS Zyatt, KWS Firefly and KWS Barrel.

This led to some significant revisions to yellow rust ratings of several varieties in the 2021/22 Recommended List, and the publication of a new yellow rust “watch list” identifying varieties most affected by the latest races.

While dry weather has reduced the immediate risk of Septoria, it remains the primary disease of winter wheat in most seasons, and with a large proportion of crops sown relatively early last autumn, there could be a higher risk this spring. 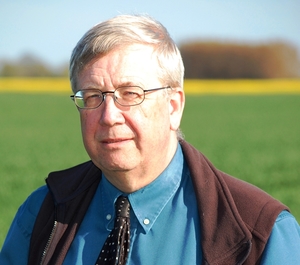 “September-drilled wheat will inevitably have inoculum lurking in the base of the crop and although it’s not spreading much at the moment given the dry weather, the risk is there. Growers will need to tailor fungicides more closely to drilling date than to what they’re currently seeing in the field,” Mr Murray says.

Rainfall during April and May are key to Septoria infection, so even later-sown crops could come under higher disease pressure when conditions become more conducive, Dr Ellerton adds.

“Depending on conditions over coming days and weeks, we could well be in a high pressure situation for yellow rust and Septoria by T2, so a robust, well-timed fungicide will be vital to protect the top two leaves which contribute approximately two-thirds of final yield.”

In lower-risk situations, such as later-sown crops, a mix of triazoles (prothioconazole/ tebuconazole) plus SDHI (bixafen) and folpet may be more appropriate, he adds.

“Without chlorothalonil in the armoury, I think considering just using a straight triazole plus folpet at this timing in my part of the UK would be a high-risk strategy particularly on September-drilled wheats.”

Looking ahead to T2 flag leaf sprays, Mr Murray warns there is a real risk that crops could race through growth stages if/ when the prolonged spell of cold, dry weather ends and milder, wetter conditions prompt a flush of growth, so growers must prepare as much as possible to ensure crops are treated at the correct timing.

Dr Ellerton says triazoles still form the backbone of flag leaf sprays, but programmes should include actives with different modes of action, for anti-resistance and to give curative plus protectant disease control.

SDHI-based products are likely to be essential in most T2 applications given the importance of Septoria, particularly in more curative situations where triazoles may struggle due to the sensitivity shifts seen over the last decade, he says.

“Losing chlorothalonil and epoxiconazole has reduced fungicide options this year, but there are still many effective actives and promising products in the pipeline.

Prothioconazole or metconazole are also suitable for low to moderate Septoria. The former can give good activity on low to moderate mildew too, but he says if mildew is well established, a specific mildewicide such as cyflufenamid may be needed.

Mefentrifluconazole is extremely strong against Septoria and offers good rust control, he adds.

“Where appropriate, including the protectant multisite folpet can improve Septoria control in high-risk situations, and help as part of an anti-resistance strategy.”

Fusarium is favoured by warm, wet conditions around this time, while Microdochium is more of a risk in cool wet seasons.

“Fusarium options are diminished with the loss of epoxiconazole, but tebuconazole and bromuconazole offer effective control, while prothioconazole remains the primary choice where Microdochium risk is high.

“It may be necessary to bolster ear sprays with additional foliar protection at T3 if disease risk is high. Additional strobilurins such as azoxystrobin or fluoxastrobin offer improved disease control in addition to physiological benefits for crop biomass, stress reduction and prolonging green leaf area retention.”