OSR growers should be aware of the risk from TuYV as results from a recent survey confirms that one third of susceptible UK crops are infected, with severe implications on yields, warns plant breeders Limagrain UK.

Turnips yellows virus (TuYV) is transmitted by aphids and it is believed that 70% of the most common aphid, peach potato aphids (Myzus persicae) carry it. Work carried out at Brooms Barn a decade ago, showed a 30% yield penalty where levels of the virus were high and infection occurred early in the crop’s life.

Since 2015, plant breeders Limagrain have led the way in monitoring levels of TuYV in non-resistant or susceptible crops across the whole of Europe, including the UK.

Leaf samples are taken both in the spring and autumn and tested using the standard Elisa test.

“We’ve mapped the incidence of TuYV from the UK to Ukraine and seen it build over the years,” notes William Charlton, arable marketing manager for Limagrain. “We’re getting to a situation where TuYV  is now endemic across Europe, and no longer confined to hotspots.”

Sampling is carried out twice during the growing season, with an initial small-scale survey conducted in the autumn, followed by extensive testing carried out in early spring. 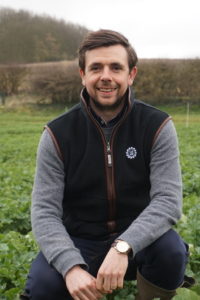 Results from this spring’s sampling confirm that one third of all the UK’s non-resistant oilseed rape crops sampled were infected with TuYV.  Samples were taken from 26 locations across the British Isles.

The highest rates of infection, which were as much as 81-100%, were reported in the Midlands.

As would be expected, high rates of infection of 66-80%, were reported from the south-east, but similarly high levels of infection were also detected as far north as the borders, and as far west as Wales. One third of non-resistant OSR crops across Yorkshire, Lincolnshire, Wales/Shropshire were also infected.

“Five years ago we would not have seen these cases in the north and west, which just goes to show how TuYV is becoming increasingly widespread, and is now endemic in the UK OSR crop, irrespective of region.”

The link between high numbers of aphids in the autumn and corresponding levels of infection is clear, explains Mr Charlton. “Infection usually occurs in September to October when aphids are still flying; the earlier a crop is infected, the more severe the symptoms tend to be with a harsher yield penalty as the plants have less seeds/pods.”

“Early drilled crops that are more open, corresponding with mild autumnal conditions, are at the highest risk.”

“As control of aphids has become increasingly difficult, numbers have increased, with a subsequent build up of TuYV inoculum in the environment.”

“Once an aphid is infected, it is infected for life – if an uninfected aphid feeds on an infected plant, the aphid becomes infected and so the cycle continues.”

“Infected plants produce fewer side branches, pods, and seeds per pod. It’s confined to the phloem, so potentially robs the plant of resources that would be fed to the roots.

“But you often don’t see severe symptoms, which is why TuYV often goes undetected. Today’s challenge is that it has become increasingly difficult to control early infection with the loss of neonicotinoid seed treatments, and getting the timings right for spray’s is very difficult.”

“Genetic resistance is by far the best way forward.”

The value of genetic resistance to TuYV has been well proven since Limagrain launched the first TuYV resistant variety, Amalie, back in 2014.

Initially the genetic resistance came with a yield lag, but innovative breeding has overcome this and today, Limagrain TuYV-resistant varieties, both hybrids and conventionals, top the AHDB Recommended List, confirming the value of the resistance in protecting against detrimental yield loss from TuYV.

Mr Charlton notes that varieties carrying TuYV resistance also play an important role in IPM, as there is less reliance on insecticides which are challenging to time correctly.

“Over the last few years, in areas where the risk of TuYV infection is very high, we have seen the uptake of TuYV varieties to be as much as 80% of the total crop.”

“There’s such a strong argument for growing a TuYV-resistant variety, why wouldn’t you?”