Concerns for 30 – 50% crop losses if weather patterns don’t return to normal for May and June have created indecision amongst farmers as to the best approach for final fertilizer applications.

“There’s no doubt about it, we are experiencing dry conditions with rainfall in East Anglia of just 47.6mm in March and April,” says Mark Tucker, Head of Agronomy for Yara UK. “However, I would urge caution before changing strategies as history shows us that even in a really dry year such as 2011, final fertilizer applications still provided a 4:1 return.”

“England and Wales rainfall figures for the last 20 years identified 2011 as the driest March, April and May with a total rainfall of 27.8mm,” confirms Mr Tucker, “and trials data from 2011, where crops received just 11.6mm of rain in March and April, saw a return on investment for feed wheat of £2.16-£3.30 per hectare from the final 60 kilo application.”

With most farms planning final fertilizer applications in the coming weeks indecision, leading to altering fertilizer plans, could be costly.

“This year’s March and April rainfall figures of 47.6mm are not dissimilar to 2010 where crops received 49.2mm,” continues Mr Tucker. “Based on returns in 2010 where the N-opt rate of 230kgN/ha reached a return of £4.69, my advice would be to ignore the indecision and continue as planned. Equally yield response on OSR for late N in 2010 increased yields to 0.23t/ha, a return on investment of £3 for every £1 spent, just on the final flowering application.”

Farms are also concerned that the minimal moisture may result in fertiliser stacking up on the surface. However Mr Tucker explains that, “if the nitrogen is ammonium nitrate then losses will be minimal (1%), however if the nitrogen is urea then losses will 15 times more at around 15 – 20% of the N applied. Our nitrogen source trials in the Borders are already showing differences with the lowest nitrogen uptake in the urea plots. The stacking up of nitrogen could also put malting barley samples at risk if low grain nitrogen is the target.” 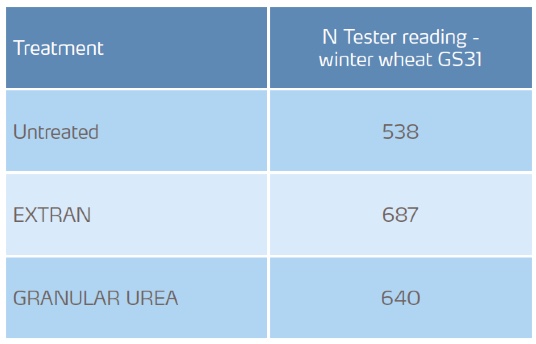