With nitrogen fertiliser supplies likely to be strained this autumn, maximising plant health with key nutrients will support strong crop development and help make the most of limited inputs.

Chris Bond, commercial technical manager for crop nutrition at FMC, explains with fertilisers in short supply and prices high, it is more important than ever to make sure plants can utilise these nutrients as efficiently as possible.

“Magnesium and manganese are two vital nutrients that play important roles in the plant, including the assimilation of nitrogen and energy release.

“A lack of manganese can lead to a reduction in the reaction which converts nitrate into ammonia which the plant can then use to build amino acids and therefore protein,” he says. 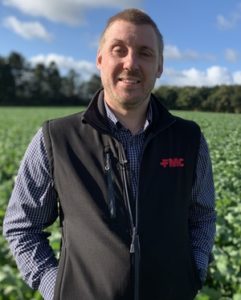 Mr Bond explains that these nutrients are also integral to the photosynthesis process in plants. Magnesium is the central atom in the chlorophyll molecule and manganese is required in the process of chlorophyll synthesis, which means these nutrients have a major influence on plant growth.

“They also increase resilience in winter cereals, as magnesium helps to release energy from ATP, helping to create a deep rooting system. Manganese on the other hand is required for lignin production which is required in frost tolerance and disease resistance ” he says.

Results from FMC’s extensive tissue analysis demonstrate that many crops are deficient in both manganese and magnesium. For example, 72% of samples tested last year had a below optimum level of magnesium.

“This means growers who have been forced to cut back on nitrogen fertilisers will benefit from investing in nutritional applications of magnesium and manganese this autumn to better utilise nitrogen from the soil and to strengthen crops over winter,” he explains.

“Applications at the three-leaf stage will help to avoid deficiencies and will give plants a well needed boost if they’re lacking in nutrients from the absence of fertiliser applications.

“Root 66® is a good option for growers as it contains both magnesium and manganese and can be tank mixed with a wide range of other plant protection products,” he adds.

“Alongside this, I would also recommend growers tissue test this autumn. It’s good general practice to carry out nutritional analysis before making any investments in fertilisers so that applications can be as targeted as possible. Growers can also then spend money on the nutrients that are truly needed,” he adds.

“It’s never been more important to maximise crop nutrition in light of the fertiliser pressures. By making nutritional applications, growers can deliver returns on any investments in fertilisers and will be in with a better chance of achieving a healthier, more actively photosynthesising crop,” he concludes.