This year there is much more winter wheat in the ground across the country, with the exception of parts of East Anglia, and crops have come through the cold snap in February well. Two distinct sowing periods caused by very wet weather last October will mean growers will have to monitor crops closely and treat fields individually.

Dr Cathy Hooper, technical sales manager RAGT Seeds said, “The earlier you drill wheat the more septoria you get, and the later, the more yellow rust.

Last year because of the wet autumn and winter a lot of people drilled Skyfall, a variety which can be drilled late, into the first week of March and I saw a lot of yellow rust in untreated Skyfall.”

This year, AHDB Recommended List (RL) winter wheat yellow rust ratings are weighted to give the greatest influence to data from the most recent year, in order to reflect the latest yellow rust populations.

Dr Hooper said, “In real terms the rating for yellow rust hasn’t changed. Skyfall came onto the list as a 5 and in the new system of rating is now a 3. KWS Kerrin, Gleam, KWS Zyatt and  KWS Firefly have all dropped 2 points. Their resistance hasn’t changed it is just because the ratings have been reset as they were not reflecting what people were seeing in the field. For growers already used to growing Skyfall and controlling yellow rust, nothing has changed.

All the yellow rust ratings on the RL are for adult resistance, which for some varieties doesn’t kick in until ear emergence, so ratings are not relevant at the T0 timing, which is why spraying for yellow rust early is so vital if you see it.

When breeding a variety we try and not rely on single major resistance genes. Where possible we also use minor gene resistance in order to have some background resistance there. It’s not always easy as obviously we are not just breeding for disease resistance.”

Dr Hooper added, “Yellow rust is now such a difficult pathogen to work with, it is an amorphous population and occasionally one race will rear its head and become the major race but that might only be for that season.”

In order to help growers focus their disease monitoring the AHDB has recently published a watch list for yellow rust which shows varieties which did not perform as their RL ratings indicated last season, potentially suggesting susceptibility to uncommon rust races. However, growers are advised to closely monitor all varieties as rust populations are able to change quickly.

An update from the field

BASF’s Agronomy Managers have been monitoring crops across the country. David Griffiths, whose area includes Herefordshire, Worcestershire, Shropshire and Wales said, “It looks really good this side of the country .Growers have definitely got much more winter crop in the ground , with 95%  drilled up this year. We got a fair amount of rainfall in the first weekend of October, but it dried out fairly quickly and they were able to carry on and get finished.

Similarly drilling went well in the south, Andrew Clune said, “I think we are about where we should be . Most people had a good opportunity to drill pre-Christmas and most drilled what they wanted to. There is at least 95%  of the anticipated winter wheat area in.

Half of that went in well and on time, from the end of September and then there were periods of wet weather but still there were opportunities in November and December to get the rest of it in fairly comfortably.” 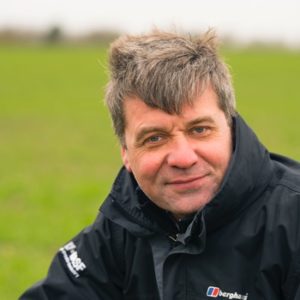 It’s a different story over in the east, Hugo Pryce in East Anglia said, “It’s a real mixed bag here. What was drilled in September generally looks pretty promising. The problem was we weren’t able to get drilling in October, it was so wet. There was a bit of a spell in November, but crops drilled then didn’t go in in the best order, so these are significantly behind in terms of growth stage and don’t have the same potential. Redrilling will be required in some cases due to the really poor ground conditions at establishment leading to crop failure.

It’s disappointing that we are not where we would like to be in terms of winter wheat in the ground. There are some crops out there with really good potential it’s just a shame that we haven’t got a few more of them.”

Across the UK a cold spell at the start of February dampened disease in winter wheat down but Septoria levels are high in crops. It remains the one disease that continues to escape our control programmes every year, and effective control strategies need to be considered using appropriate rates both from a resistance management and efficacy perspective.

Hugo Pryce said, “The winter wheat that was drilled early has come through winter quite well but is likely to be carrying reasonable amounts of septoria into the spring following the last few wet months. The later drilled backward crops are unlikely to be carrying as much disease at this point in time. At a recent inspection of the variety trials at one of our Real Results Farms in Suffolk Yellow rust was not readily found, perhaps not surprising following the recent cold spell.”

Mr Griffiths echoed this, he said, “ The thick early drilled September crops will take a little bit of looking after as we get towards T0. Where you’ve got yellow rust prone varieties or you can actually find it then a T0 will be a must, especially with the loss of epoxiconazole. Growers need to get in front of yellow rust.”

Crops in Mr Griffiths’ area are well rooted but the same cannot be said for those further east where Mr Pryce commented, “A lot of Canopy® will go on at T0. It will help with rooting as potentially many early drilled wheats will be shallow rooted.”

Herbicide application will be prioritised here too. Mr Pryce said, “If growers got a pre-em on they were lucky. They will now be going through, trying to put some more residual down with a contact, like flufenacet and pendimethalin as a residual top up.”

All the Agronomy Managers report winter oilseed rape (WOSR) as a positive news story this season. In the south Mr Clune said, “We had some very well established crops going into winter, the potential is there. However, the area drilled is down about 50% as growers have become risk averse. Ironically, we haven’t had the crop losses from cabbage stem flea beetle (csfb) that we had in previous years. People are now starting to find larvae in the crops, but they don’t seem to be in large numbers.”

The same is true over in the east where WOSR was in in good time and flew out the blocks. Mr Pryce commented, “There was a lot less csfb damage externally in the autumn  and also now, there are low larval numbers in plants. So that’s looking promising.”

Pigeon damage has been an issue. He said, “Some of the crops were quite leafy going into winter but are being hammered by pigeons. Generally however, prospects for WOSR look reasonably good, and there will be a need for Caryx® where they haven’t had too big a problem with pigeons.”