Following the recent loss of two post emergence herbicides alongside some unpredictable and extreme weather patterns across much of the United Kingdom there is little doubt that achieving good maize yields has been more challenging for many maize growers during the last two years.

But, as agronomist Sam Luty correctly points out, you cannot control weather or product withdrawals so concentrate on the things you can control such as establishment, nutrition strategies and early weed control in order to get your maize crop off to the best possible start.

“I joined Agrovista in 2012 and currently advise on over 500ha of maize covering mainly North and West Yorkshire. It’s a large region with a diverse maize customer base made up of livestock farms growing whole crop maize, arable farms growing maize for anaerobic digestion (AD) and, in South Yorkshire, a number of grain maize growers. As a company Agrovista has put significant resource into maize trials, helping farmers to improve areas such as establishment, weed control and maximising the benefits of under-sowing maize with grass” he says.

Specific challenges for maize growers in the region include tackling key problem weeds such as black nightshade, cranesbill, fumitory, mayweed and mugwort.

“On weed control there are certainly big challenges ahead this year. The loss of Calaris and, more recently, Bromoxynil means growers must now plan earlier and fully commit to a strong pre-emergence spray to reduce early weed pressure giving them more time to tailor post-emergence sprays to the specific weed burden in each particular field. 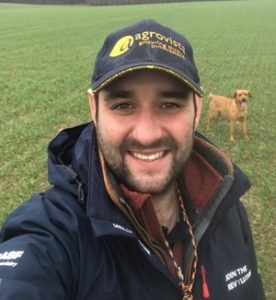 “Pendimethalin is generally effective as a pre-emergence spray when applied at 1200g/ha but can struggle with weeds such as cranesbill and mugwort so I will be following up with Gyo (pyridate) partnered with Elumis, an oil dispersion formulation combining nicosulfuron and mesotrione, as my key post-emergence spray. I try to time this spray at the 4-leaf growth stage along with an application of multi-nutrient foliar feed such as Zeama which comprises phosphate, potassium, magnesium and zinc.

“Gyo is an important inclusion in the tank-mix, not just because of its crop safety, but also for its reliability and speed of knockdown on both larger and newly emerging weeds. Unlike Elumis, it has no following crop restrictions – important for farmers growing maize within a wider rotation and it’s a “must” in situations where a pre-emergence spray couldn’t be applied. Remember to keep water volumes at 200l/ha to ensure good crop coverage” he adds.

“It’s important to understand that if it is done correctly, growing maize and grass together will protect soil and, in many cases, can enhance yield due to its flexibility achieved at harvest allowing growers to select their optimum time to chop the maize crop.

“During drilling you must achieve a 25cm gap between grass and maize to prevent the grass smothering the maize, as well as competing for light, water and nutrients. My favoured timing for under-sowing grass is at the 4-6 leaf growth stage of the maize crop using a mix of fescue and perennial ryegrass found in products such as Technisward Enviromax. This mix has been tested and specifically designed based on trials carried out by Agrovista.

“If the key steps are followed correctly then there should be no adverse effect on yield with farmers also benefiting from improved soil quality and reduced nutrient leaching. With environmental legislation on growing maize potentially set to change, under-sowing could be a key way to future proof the crop.

“One final step towards improving maize yields is the precision application of starter fertilisers such as diammonium phosphate (DAP) ensuring the required nitrogen and phosphate are readily available to the developing maize crop during its critical early growth stage.

“Even in late season maize is still very nitrogen hungry so I would also recommend a foliar application of the controlled release nitrogen fertiliser MZ28, applied at the 8-10 leaf growth stage. This is particularly effective when growers are seeking good cob formation as when the crop reaches its full height it is impossible to make a further pass of nitrogen” he concludes.