Newly added to the recommended list last year for both the East and West regions, OSR variety Tennyson from Elsoms Seeds coped well with the recent hot and dry weather conditions that prompted moisture concerns among many UK rape growers.

Mr Ford says: “We’ve grown rape for 32 years now and I’m struggling to recall a drier Summer. Farming 1500ha just outside Poole, with a 1 in 5 rotation for rape, we grew 230ha of rape this year, including 91ha of Tennyson selected for its early Autumn vigour and solid disease resistance scores.

“Although not as tall as other rapes, we liked it from a management perspective, given that it stood well and there was no need to top the stubs when we harvested on July 16th. We drilled all our rape in August last year giving it the best opportunity to establish quickly and grow away from early pest damage. Overall, I think our strategy worked well.

“Tennyson is definitely a low inputs variety and only received a basic fungicide package consisting of 2 sprays of Tubosan along with 3 splits of N25 fertiliser plus some DoubleTop applied between February and April. Final yields for the variety exceeded our overall average of 3.9-4.1t/ha for rape this year – an excellent result considering we’d drilled the Tennyson in our

“We’ll be drilling Tennyson again this Autumn but have opted to go with primed Tennyson seed this time to take advantage of speedier establishment though use of pre-germinated seed that requires less soil moisture” he confirms.

Over at Gillow Farm, a 728ha arable business located halfway between Hereford and Ross on Wye, farmer Gareth Watkins harvested 93ha of oilseed rape and was very satisfied with a final yield of 6.07t/ha on his 40ha crop of Tennyson. 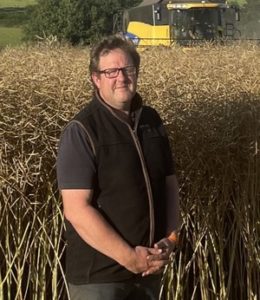 “We cut very early in the morning, achieving moisture contents of between 6.5 and 8%, but the hot dry weather in late July admittedly made the harvesting a bit ‘stop-start’. Splitting our rape acreage last year between Tennyson and LG Ambassador, the Tennyson ultimately proving itself the stronger and more disease resilient of the two.

“Both varieties were drilled on September 14th, later than we’d planned, and both established well with the Tennyson displaying the greater early vigour as it raced ahead through late Autumn. Recommended by Duncan Durno of Openfield who runs their rape trials, Tennyson is a stiff strawed, high yielding hybrid with no real weaknesses. In hindsight, I think we could have limited its fungicide programme to a single spray and simply gone with 2 splits of nitrogen and a single pre-emergence herbicide application, such was its strength and competitiveness.

“This Autumn the plan is to drill earlier, splitting our rape area 50-50 between an unprimed variety and primed Tennyson. Recent trials have demonstrated both faster germination and yield benefits from primed seed so we’re keen to explore the new technology as a way of minimising future risk when establishing rape” he adds.

Based on the Lambourn Downs, between Wantage and Lambourn in Oxfordshire, farm manager Piers Cowling of Sparsholt Manor Farms achieved 3.45t/ha on a 50ha crop of Tennyson, higher than the farms historical average of around 3t/ha for rape. 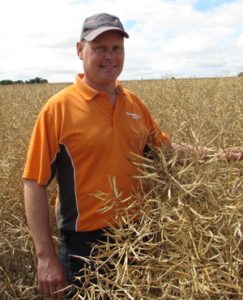 “High altitude means we tend to harvest late, so all our rape is always late drilled – not ideal when we also happen to be in a high CSFB pressure area, but the later drilling does offer some help in controlling our blackgrass. When late drilling rape good early vigour is always our top priority so the decision to go with Tennyson was relatively straightforward. We drill rape with 3 companion crops and apply starter fertiliser to give crops the best opportunity to establish well.

“Although CSFB populations weren’t too bad this season, I estimate that we still lost around 15% of our final rape yield to pigeon damage. That aside, the new Tennyson crop performed extremely well. Its strong disease resistance meant that we were able to go with a single spray of Tebuconazole at 0.6l/ha in the Autumn and just one spray of Tebuconazole + Fluoxastrobin was then applied in May at early yellow bud. Beyond that the Tennyson received 220 kilos of nitrogen applied between February and April in 3 splits. It yielded almost half a ton above the farm’s rape average and was the most consistent of the 4 rape varieties we grew.

“As we’re very much tied into a later drilling cycle, we’ve decided to go with Tennyson again – this time opting for primed Tennyson seed enabling us to potentially drill the crop a few days earlier. Primed seed requires less moisture in the soil and it’s a proven way of accelerating early growth in young OSR plants. This should help the crop to grow away from CSFB and any other pests” concludes Mr Cowling.