A new web-based service to help UK wheat growers and agronomists stay a step ahead of unpredictable yellow rust outbreaks is being launched by Syngenta.

Rust locator 2021 – available at www.syngenta.co.uk/rust-locator-2021 – uses an interactive map to record the locations of yellow rust infections, along with the variety affected, its yellow rust resistance rating and drilling date.

Having a regional picture of where infections are appearing gives growers and agronomists added information to help head off outbreaks before they become more damaging, says Syngenta disease control specialist, David Ranner, for example by using the most appropriate fungicides at the T1 spray timing, he adds.

“Information for Rust Locator 2021 is provided by Syngenta field staff,” says Mr Ranner. “But we’re also encouraging growers and agronomists around the country to submit their own yellow rust sightings, with a chance to win a branded Elatus Era tube scarf for those who do. 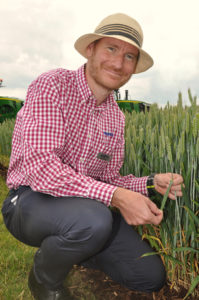 “By having more people uploading ‘eyes-on-the-ground’ sightings, we want Rust Locator 2021 to be for everyone’s collective benefit. Yellow rust can cause yield losses of up to 50%. Like Septoria tritici, it is a disease that is better prevented, rather than trying to cure it once established. But we have seen over recent years how quickly infections can escalate, and how quickly variety resistance can decline.

“Having an early warning that yellow rust is active underlines the need to manage it appropriately in your own crops.

“We are encouraging as many people as possible to play an active part in Rust Locator 2021,” Mr Ranner adds.