The Allerton Project in Leicestershire has been pioneering new farming methods since it was established in 1992. The focus has always been on regenerative farming and using techniques that can positively impact farming practices.

Farm manager, Phil Jarvis, and his assistant, Oliver Carrick, have been keen to utilise technology at the project and have recently been taking advantage of new drone software to monitor crops. Mr Carrick has been using a drone to take arial images that can be examined and used to make decisions. “I essentially do the groundwork from the air, before the researchers delve deeper into the science,” he says.

Mr Carrick uses Skippy Scout, a mobile app that automates drone flight, to capture and interpret images. The app has been developed by agricultural technology pioneer Drone Ag to offer farmers and agronomists a way to walk their crops up to ten times faster than conventional methods. “Skippy is a phone or tablet app that enables the user to upload field maps and select points for their drone to photograph. The app analyses the images to offer information on weeds, pests and also provides an accurate green area index (GAI) figure.”

Mr Carrick has been using the app and drone combination to monitor broad acre crops including wheat, oats, and beans. “We have used Skippy to determine the GAI in a number of trial fields that we practice different cultivation methods in. For example, we have a plot that is ploughed, another that is mid till and a third that is light till. The drone enables me to view those fields in a fraction of the time it would take on foot, and I have instant GAI and images to share with colleagues.”

Each of the plots being monitored has been assigned five scouting points. These then act as a benchmark between drone flights to compare progress. “The software remembers the exact point in the crop so I can provide a direct comparison. This means that we have more time to study the results and we can act more quickly.” 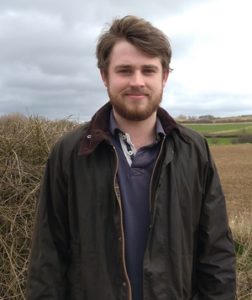 Any map layer such as soil maps, yield maps or even topographic maps can be imported into the software, using a phone to either save or photograph it. The base satellite map can be used to draw field boundaries and the saved map layer can be uploaded, named, and overlaid to guide scout point selection. “Once I have established the field boundaries I can plot as many points as are needed to capture an accurate cross section of the crop. The drone decides the route and there is no manual flying required once the points have been selected.”

Unlike satellite images, the drone is able to fly very close to the crop, a feature that Mr Carrick believes provides more detail and flexibility. “Clouds often interfere with satellite images, but Skippy can fly a drone at leaf level to take images. This is more accurate and provides us with better data,” he says. The data enables him to accurately report on crop performance, weeds, and pests. This helps the project to reduce the use of chemicals through more effective integrated pest management, facilitated by faster and more accurate crop analysis.

In a field that was drilled with winter wheat Mr Carrick identified yellow rust. “The drone spotted that the GAI had changed in a corner of the field, requiring further investigation. It was the early signs of yellow rust. With multiple scout points in that field, it helped clarify the extent of the spread,” he says. This is how he anticipates the project, and other drone users, will be able to see the full benefit of the software. “We see a future where drones can identify weeds and pests early enough to reduce our use of chemicals. This will benefit the environment as a whole but will also be a financial benefit to farmers too.” he adds.

New artificial intelligence (AI) in the latest 2.5 version of Skippy Scout analyses images from the drone and provides a PDF report. “With the AI I no longer need to manually look through the photos which saves a lot of time. I see this being another way for farmers and agronomists to gather extra data easily and quickly. This, when combined with traditional crop walking, will provide a more detailed understanding of how crops are performing.”

The technology is not without some basic practical constraints. “Drones can’t fly in bad weather and the batteries I have only allow for 25 minutes flying time. This means buying more batteries at £120 each or waiting to recharge. However, there is little doubt that battery technology is going to move on,” he says. “Using Skippy makes scouting more enjoyable and I can see more information more quickly by observing crops with a drone. It is another tool, and one that I can see many farmers adopting to give them an edge in the future,” he concludes.