Farm trials provide an excellent test-bed for the latest tools and technology in real-world situations, and for the last two seasons there has been so little opportunity to have any shared experiences or learnings, so the chance to come together this year has been welcomed.

The Hutchinsons Carlisle regional technology centre, held at Midtown Farm, Kirkhampton, by kind permission of the Brown family is a longstanding event in the trials diary for local farmers. This year the enthusiasm for the event was stronger than ever and drew over 100 visitors to its open day on 22nd June.

Adhering to Covid regulations, small groups visited several stations across the site, each one focusing on different areas of crop production.

Agronomist Helen Brown who was involved with organizing and running the day said: “ We planned and carried out the trials in the hope that when we got to the summer we would be able to show visitors around and share the learnings of the season. Its always really useful to see work done at a regional level as this is then relatable back to other farms in the area. So you can imagine our delight when we were able to run the trials day!” 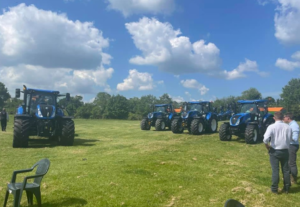 Small groups visited several stations across the site, each one focusing on different areas of crop production.

A key area of focus of the trials work this year has been to evaluate different drilling methods, explained Helen.

The field chosen for the trial was stubble turnips over winter and had Farm Yard Manure  applied before being flat lifted and then the field was split into four strips and established as following:

“What we found was that there were 63% more plants/m2 in the combination drilled compared to Mzuri drilled trial plots and the visual difference in the crop were really clear.

“There was also significantly more weed pressure (predominantly chickweed) in the mzuri-drilled section].

Helen points out that there were benefits form the Mzuri system such as less labour and fuel at drilling and an improvement in soil structure.

Helen also referred to work that had started last year, looking at how to increase yields in thin plant populations and managing thick populations, and this showed that using PGR’s at appropriate timings increased yields on the lower plant populations.

“Variety choice is a major decision, but with the issues around fungicides and evolving disease resistance, there’s increasing focus on using genetics to ease crop management. This is an ideal chance to see how varieties perform under local conditions and soil type, and discuss all aspects of variety selection and markets,” said Stewart MacIntyre, Hutchinsons seed manager for the north.

“We have run a tramline through the middle of the trials and turned the boom off on one side, whilst the other side has been treated with a farm standard programme- so a really good opportunity to see the varieties laid bare compared to their performance under standard farm input programmes.”

“The untreated plots sparked much discussion around the unusually high levels of wheat disease this year, particularly yellow rust which is unusual for Cumbria, and also mildew. Varietal differences were very clear; Extase stood out as one of the cleanest varieties whilst Zyatt had clearly broken down to the ravages of yellow rust.

“There were also significant infections in the untreated barley plots.”

Stewart MacIntyre, provided his cereals recommendations for drilling this autumn.

“Winter wheat is seeing little change in terms of preferred varieties in the market for autumn 2021.”

“Group 1 wheats will be miller influenced with Crusoe producing the best quality and KWS Zyatt and Skyfall offering the higher yields. Skyfall still offers the greatest flexibility for drilling, with the latest safe sowing date and OWBM resistance. However its important to note that the latter two varieties have seen greater yellow rust pressures in the last season. “

He sees Group 2 Extase as the variety of choice, with excellent disease resistance and still an exceptional Septoria score of 8. LG Detroit offers OWBM resistance in the group 2 sector and has East/West recommendation but not the standout untreated yield of Extase.

“In the Group 3 we do see some new developments, with five newly recommended varieties, with the standout variety to my mind being LG Astronomer. Although not the highest yielding, it has acceptable quality for both biscuit making and distilling. It is not an export variety like KWS Firefly or LG Illuminate, but it has the best agronomics and I believe that is key. LG Astronomer has some of the best untreated yield figures on the list, with 7.4 for Septoria, 9’s for both Rusts, a 6 for Fusarium and OWBM resistance, coupled with an 8 for lodging with a PGR. “

“KWS Barrel will still be a popular choice for the north and the borders.”

“In the Group 4 portfolio I would keep it simple,” he said.

“Skyscraper and RGT Saki for soft preference and in the hard section, Gleam, SY Insitor and newcomer KWS Cranium, which is short and stiff and has acceptable agronomics with good yellow rust 8, Septoria 6 and again OWBM resistant.”

“Finally, we need to focus on RGT Wolverine, which put its toe in the commercial market in autumn 2020 and will have greater availability for this season. Wolverine has BYDV resistance, although with an average yield at 102 (3% off the top) and requiring a more robust fungicide programme, it will have a key place in the autumn for the management of BYDV.”

“With greater aphid presence and earlier drilling being employed more widely, then this focus can be utilised to counteract any delay in spray application and of course enable prioritising those varieties without the trait. This will also benefit those growers with land further afield from the main enterprise. RGT Wolverine will require stewardship but can undoubtedly provide a significant benefit in autumn 2021.”

There are one or two new winter barley contenders on the AHDB Recommended Lists that will offer a step forward in yield. KWS Tardis, Bordeaux and Bolton all look to offer very similar ability with little if any discernible difference in yield, both nationally and across the regions, said Mr MacIntyre.

“Grain quality also looks decent in the high 60’s for Kg/hl weight. (lowest is 68.6 and the highest 69.9, so no major concerns in that department) disease resistance also looks acceptable and with Tardis having a 7 score for Rhynchosporium, this also looks an asset.”

“Aside from these three, there will still be an interest in the proven varieties such as KWS Orwell, LG Mountain, Surge, Valerie and the old favourite KWS Cassia, which still holds demand within the marketplace. California is still a niche within the south west for livestock growers with a straw requirement.”

In the malting segment, the options remain Craft and Electrum, with the choice in the region being aligned to the Maltsters’ preferences, he points out.

“Hybrid barley will see the market being dominated by Kingsbarn, Bazooka and Belmont primarily. Thunderbolt newly added this year is equal to Kingsbarn for yield but will need a robust PGR as it has poorer standing ability.

There will still be limited interest in Libra with its very consistent grain quality. Limited introduction of candidate variety SY Javelin sees a marked change in untreated yield, with the variety possessing a 9 score for Rhynchosporium. Yield wise it will be comparable to Kingsbarn, but with earlier maturity.”

“Finally, there are the BYDV tolerant varieties to consider for management purposes and Sensation is currently the variety of choice in this six-row feed barley market, as we stand. Six-row malting candidate KWS Feeris also possesses this trait and may be of some interest to monitor for the future.”