RAGT’s new blend of companion crops and oilseed rape designed to reduce cabbage stem flea beetle damage is proving its worth in trials and on farm this season.

Recent larval counts in the trial, which was drilled on 6 August, reflect the significant difference in flea beetle damage last autumn. The average number of shot holes/m2 in October was just under 20 in the RGT Beetleblocker, well under half the 43 bite points recorded in the straight RGT Blackmillion.

There was a strong correlation between this result and the number of beetles caught in traps, with 11 in the RGT Beetleblocker and 26 in the RGT Blackmillion plots.

Larval counts taken on 26 February showed RGT Beetleblocker contained an average of 10 larvae per sampled plant, compared with 23 in straight RGT Blackmillion. Numbers ranged from 18 to 27 and 9 to 12 respectively.

“This is only one trial on one site, but the results are really encouraging and show that the 50%+ reduction in damage and beetle numbers seen last autumn has resulted in a near identical drop in larvae numbers this spring,” says Cathy.

The plan next season is to plant six sites and take the best three forward, to avoid a repeat of this year’s trials loss and set up as rigorous a test as possible, she adds.

One 18ha area across three fields is with a first time OSR grower who has taken a low-input approach. The entire crop has been grazed with varying degrees of intensity.

“We decided to get some sheep in as we were finding a few larvae and phoma need controlling,” says Adam.

“The crops had been direct drilled so coped well without getting wet and muddy. We used different stocking rates and duration so we’ll be able to assess how different regimes compare in terms of recovery and eventually yield.”

Adam is using satellite imagery to help track regrowth. “Areas that were subject to heavy grazing have suffered, but most have bounced back well and the crop was typically back up to knee height in early March.”

The combination of early drilling (10 August), grazing and companion crops means crops have a much lower larval burden going into spring. “We’ve not cured the problem completely, but it has definitely helped,” says Adam. “Prospects look pretty good.” 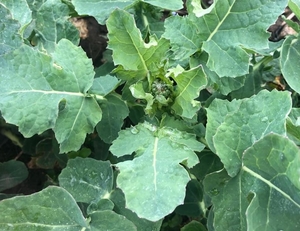 A neighbouring farm opted for a straight comparison trial, establishing 37ha of RGT Beetleblocker and a small area of conventional OSR with no companion crop, all sown off the back of a TopDown in early August after fallow.

“The crop didn’t stop growing from the day it was sown until Christmas and at one point was over 50cm tall, though it’s now about half that,” says Adam. “It looks very good, and is probably carrying 50% fewer larvae than that with no companion crop.”

Both RGT Beetleblocker areas had Astrokerb in January to take out a few grassweeds, thistles and the companion crops, which had survived the winter frosts. “Managing the two crops is going to challenging in the spring,” says Adam. “But at least we have crops that are worth looking after.”

The crop was sown on 8 August. “There was very little beetle grazing damage in this or the adjacent hybrid OSR, probably because we drilled very early and the crop grew so well, before flea beetle pressure really developed,” says Kathryn. Very few larvae have been found since in either stand.

However, RGT Blackmillion plants within the RGT Beetleblocker mixture looked much bigger and healthier through the autumn and winter.

“This is probably due to the nitrogen released by the berseem clover,” says Ms Richards. “Although we had to apply a herbicide which removed companion plants earlier than planned, this set the crop up for the winter.

“This could be very useful. Although the difference has now largely disappeared we get a lot of pigeon pressure here, so the thicker the canopy going into winter the better.”