Making better use of existing soil phosphorus reserves will greatly reduce the risk of spring-sown crops running short of this essential nutrient during establishment.

Spring cereals in particular have a high demand for P in the first few weeks after germination. But they are often unable to secure enough to support optimum growth even where the nutrient appears to be plentiful.

“New sowings on high calcium or high pH soils are especially vulnerable to shortage, as most of the phosphorus is bound up as insoluble calcium phosphate and is not available to the crop.

“This risks poor growth and tillering and puts plants on the back foot before they can get going.”

Applying bagged fertiliser to overcome this is expensive and inefficient. Depending on soil type and pH, as much as 90% of P applied in this form can be locked up quickly, often within days.

“It makes much more sense to make use of what’s already in the soil,” says Mr Hemmant. “In these situations, I advise using Phosphorus Liberator, a soil-applied product that can free up significant amounts of P in a very short time.”

Phosphorus Liberator, which is based on carboxylic acid technology, releases bound calcium phosphate and keeps it in solution, where it breaks down into its constituent parts. This ensures phosphate is available for root uptake during the first critical few weeks.

The product can be applied through a conventional sprayer pre-drilling or tank-mixed with a wide range of pre-emergence herbicides at rates tailored to soil P levels and crop need.

It is effective over a wide temperature range, is biodegradable and is not classified as hazardous to the environment, with the added benefit of reducing fertiliser bills and improving efficiency from applied phosphate fertilisers and manures.

A statistically significant 0.4t/ha yield increase was seen in plots where the product was applied pre-emergence compared to the untreated controls, despite applying a commercial rate of bagged phosphate fertiliser to the whole trial. 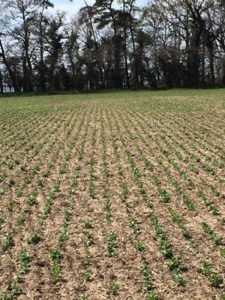 Phosphorus Liberator had a marked effect on bean plant count

The effect could also be seen in grain specific weight at harvest, which increased by 1.49kg/hl. “Both gains were impressive and statistically significant, despite there being no visual difference observed between plots,” says Mr Hemmant.

“We saw similar results in spring barley, and it seems likely we could see an increase in specific weight in spring oats. Meeting milling specification is critical with this crop, so that’s an area we will be looking at.”

Plant numbers on the treated area hit 22/sq m on 4 April, compared with 13 on the untreated area. Foliar and root weights were 133% and 122% higher respectively on the treated part. “Visually we saw a big benefit in establishment and in plant weight,” says Mr Ham.

Hot, dry and subsequent drought conditions for the rest of the season took its toll on the sandy soil. However, plants on the treated area formed more pods than the untreated before the main impacts were seen and thus performed to the national average.

“The field had a P index of 4.2 but we still got a good response, showing that even where there appears to be plenty of phosphorus it is important to make sure it is available to plants during the critical early phase,” says Mr Ham.

“I have used the product commercially and run a lot of trials and have had a 100% strike rate, seeing massive plant responses. The additional root growth enhances a crop’s ability to capture nutrients, manage against root-related diseases and cope with drought conditions.

“Phosphorus Liberator is likely to work as well in spring beans in a similar situation and may be even more important in spring crops generally, due to the shorter period of time available to obtain sufficient root growth.”

How to use Phosphorus Liberator