Many crops are still suffering the adverse effects of exceptionally low rainfall this spring, while the hugely inflated cost of fertiliser has seen potato growers cut back nutritional inputs to the bare minimum.

“Any agronomic factor that increases stress on the crop can act as a precursor for Alternaria infection, as well as the severity of the outbreak,” he advised. “Early season infection and subsequent loss of leaf area inevitably has a greater impact on yield.”

With the onset of stress effects, Mr Cunningham believes growers should look to consider Alternaria protection earlier in their blight programme, as fungicide control of the pathogen must be applied preventatively.

May need to bring forward treatment

“Alternaria treatments have historically been focussed to start around the end of June or beginning of July,” he said. “Where growers have identified an increased risk of stress, or have historically suffered from Alternaria losses, however, that may need to be brought forward this season.”

To counter the Alternaria threat, Mr Cunningham advocated growers and agronomists utilise Amphore Plus through the primary risk period – incorporating the strong late blight protection of mandipropamid with the Alternaria activity of difenoconazole.

“Using the pre-formulated combination delivers 20% more difenoconazole with each application to boost alternaria protection, compared to the maximum permissible rate of the active when applied as a straight product,” he added. Independent research by Eurofins in 2021 identified Amphore Plus as particularly effective for blight control and giving control of all blight strains, including EU_36 inoculated in the trials. 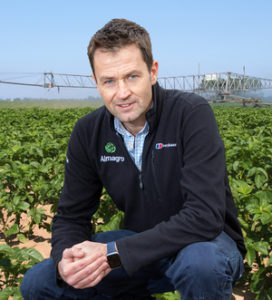 Furthermore, where growers are using Revus in their blight control programme, as the most effective straight CAA group fungicide, the addition of mancozeb in the tank mix is a valuable resistance management strategy and adds potential Alternaria protection too, he pointed out.

Mr Cunningham also highlighted that the cumulative effects of multiple stresses can have greater effects on potatoes, even at relatively low levels.  “Plants that are already performing sub-optimally under stress from moisture or nutrient deficits, for example, can then be impacted badly by further pressures.

“That has been especially evident with the increasing impact of heat stress on potatoes. Enabling plants to be better prepared to cope with the adverse effects of heat stress with applications of the biostimulant, Quantis, could help mitigate the effects of other stress factors and reduce the crops’ susceptibility to Alternaria,” he added. Further Syngenta  trials into these stress mitigating effects are planned for the 2022 season.

Recent Alternaria research in Denmark, has suggested that while all cultivars in the trials were susceptible to Alternaria, the rate at which the infection developed in the foliage could indicate some varietal resistance. Later maturing varieties were typically, but not exclusively, more resistant to disease spread.

Successive seasons reporting of UK Alternaria monitoring by NIAB, sponsored by Syngenta, has highlighted no significant varietal trends. It has, however, repeatedly shown that A. alternata has been the first early blight pathogen to hit potato crops, followed by later infections of A. solani.

“That’s important because A. alternata can create multiple leaf lesions and damage, which could prove to be entry points for the more aggressive A solani,” advised Mr Cunningham. “It also validates why agronomists would choose to use difenoconazole first as an active against A. alternata, followed by Amistar later in the season for A. solani and green leaf area protection.”