Greater use of natural regeneration breaks and cover crops in arable rotations means the weed seed burden of some of the more troublesome weeds for potatoes are on the increase. Cleavers, mayweed and shepherd’s purse, for example, can proliferate rapidly in a single season.

“Recent potato herbicide introductions have increased agronomists’ options. In many instances, however, simple mixes can achieve everything growers want, at lower relative cost,” he suggests. 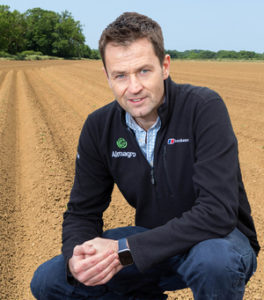 “Many of the key weeds that burden early potato emergence can be controlled, using the strength of mixes to widen the specific weed spectrum,” he advised.

Recent season’s trials had shown a mixture of Defy (prosulfocarb) at 4.0 l/ha + metabromuron at a reduced rate of 1.0 l/ha, for example, achieved full control of assessed broad-leaved weeds, including chickweed, mayweed, cleaver and shepherd’s purse. Untreated weed pressure from these species was more than 70 per m2.

That combination, typically costing just £43 per hectare at current prices, was even more effective overall compared to Defy at 3.0 l/ha and metabromuron at a rate of 2.0 l/ha, which would cost nearly £55/ha and proved slightly weaker on cleavers.

Using Defy at 4.0 l/ha plus metribuzin at 0.5 l/ha could also reduce costs, but the trial showed that overall effects on some weeds could be reduced. “It is important to know the target weed spectrum when putting together mixes of the most cost-effective actives and appropriate rates,” advised Mr Cunningham.

As well as the wide spectrum of broad-leaved weeds controlled by Defy, it also offers control of grass weeds including meadow grasses and ryegrass. Using a higher rate extends the residual activity and means applications can be conveniently made soon after planting, until soil is rising over emerging potato shoots, to keep fields clean through to crop emergence.

New Syngenta potato trials for the 2022 season are set to investigate the extra benefit of total weed spectrum control from increasing Defy rates to 5.0 l/ha, at marginal extra cost in a high-pressure situation, as well as mixes with new and existing herbicides.

“Some options with newer herbicides in the trial add up to in excess of £100 per hectare, with others as low as £20. It’s vital to tease out what each component is contributing, to enable better informed decisions in the future,” he added.

One shepherd’s purse plant, for example, can produce over 3000 seeds, and is capable of cycling three generations in a season if left uncontrolled. The seeds are long-lived and will emerge quickly when brought to the surface by potato seedbed cultivations.

“Growers should also be aware that shepherd’s purse is a host for white blister, which can be spread to brassica crops if they are grown in the rotation,” warned Mr Cunningham. Although seen as relatively easy to control, the burden and the costs of control are rising.