Independent trials are demonstrating the clear benefits and significant return on investment of applying a new biological seed treatment in both cereal and bean crops, with calls to make applications now for best results in all cereal seed.

Manufactured in the UK by bio-technology company AminoA, and fully approved for use in organics, AminoA STAART should now be applied to all cereal seed at a rate of 3 litres/tonne, either alone, or in combination with other seed dressings.

Launched in November 2020, AminoA STAART has been independently trialled across various crops including spring barley, winter wheat and spring beans.

“This year’s trials demonstrate an impressive return on investment (ROI) of over 10-1 and translate our overwinter growth chamber trials at NIAB Cambridge, which saw a 14% increase in root mass but only a 4% increase in shoot mass (by DM) in winter wheat, into yield data,” explains AminoA managing director Richard Phillips.

“Not only does AminoA STAART increase the crop yield, but it also increases your ROI. Recent trials have shown the STAART seed treatment programme costs £8/ha for a return of approximately £100,” he adds. 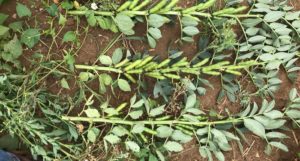 Andy Cheetham, agronomist at Ceres Agri Services, has used AminoA STAART on his 2021 spring barley crop and found, despite a sand-based soil, the treatment has produced strong results on the 2021 crop.

Prior to treatment in 2020, the crop growth in his malted spring barley was patchy, as the soil is extremely sandy. After treatment with AminoA STAART, 2021’s crop has produced a much improved, all over growth rate.

After the removal of approval for fungicidal seed treatments in June this year, AminoA STAART is the only available seed treatment in the UK for beans.

Results from PGRO trials in Stubton with spring field beans (Vicia faba) variety Lynx, at a dose rate of 5 litres/tonne, show a combination of AminoA STAART and AminoA FLO, the concentrated natural bio-stimulant and nutrient source, demonstrated a significant impact on yield over the untreated control.

“Mean yield was 4.80 t/ha at 15% moisture on the trial using AminoA STAART and FLO in combination, against the untreated yield of 3.90 t/ha. When Sigma fungicide was used at T3 yields further increased to 5.3 t/ha” says Mr Phillips.

Like other products within the AminoA range, STAART is suitable for use with all crops. Visit www.aminoa.co.uk for details.