Varietal resistance to spinach downy mildew is now one of the most important selection criteria in variety choice for the UK’s specialist growers, according to Syngenta leafy salad specialist, Rosemary Atwood.

The announcement of two new official races of the spinach downy mildew pathogen (Peronospora effusa) this season further increases the challenge for the industry and the focus for breeding programmes.

The newly declared race Pe:18 has been found widely across Europe, with the strain Pe:19 predominantly in the US. However, the International Working Group on Peronospora in spinach (IWGP), has declared: ‘both races pose a significant threat to the spinach industry in all parts of the world, and resistance to these new races is important’.

“We are increasingly seeing the importance of varietal resistance in helping to effectively prevent what can be devastating outbreaks of downy mildew,” reported Rosemary.

“Crucially, our breeders have been monitoring development of the pathogen across Europe in recent years, so have already selected varieties to counter the new races, as part of the overall comprehensive downy mildew resistance package.”

She pointed out that the criteria for official recognition of downy mildew races includes having been present across a wide area and for successive seasons, as well as being different to existing races. 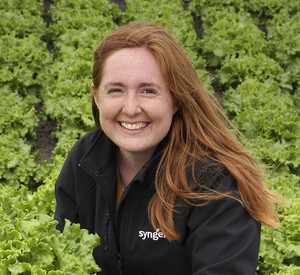 “That means we have been able to test new varieties, such as El Lucio, El Furio, El Bravo and El Halo, against the prevailing local disease pressure, and can be confident in their robust resistance.” All of these Syngenta varieties are resistant to the new races Pe:18 and Pe:19 for UK and European growers.

Although some of the older races of downy mildew may no longer be prevalent, Rosemary advocates varieties that can show resistance to a wider range of races could be more reliable.

“In reality, there are many more races of downy mildew in circulation across Europe than those that are officially recognised, possibly at a localised level or just occasional outbreaks. Selecting varieties bred for European conditions and market, and tested widely across the region, gives the best chance to minimise risk from the damaging disease.”

She highlighted the Syngenta range with full downy mildew resistance covers the entire growing season, with El Bravo performing well in covered tunnel growth and earliest season production, followed by El Furio through the late spring that has excellent dark colour and robust leaves that are perfect for processing. Through the tricky mid-summer season El Halo has performed exceptionally reliably against bolting. To complete the season growers can return to El Furio and finally El Bravo, she added.

“We now have growers utilising all three varieties in their programme, to get good consistency of production right through the season,” she reported. Further new varieties being introduced this year also show excellent resistance against the new strains and other downy mildew races in Europe. The Syngenta European spinach breeding team, now led by Rinse Jaarsma at Enkhuizen in Holland, is also actively integrating high resistance to stemphylium into the company’s new spinach introductions.

Rosemary added it remains crucially important to track and trace any new races of downy mildew. “That means we can test new varieties against potential threats of the future and, if it becomes sufficiently established across the region, for it to be categorised as an official race.”

Where growers do see outbreaks of downy mildew in varieties that have good resistance, Rosemary would urge them to join the industry initiative to have it tested and recorded – which Syngenta is actively involved with assisting.

Climatic change trends are increasingly resulting in periods of prolonged hot and humid conditions that are particularly conducive to downy mildew incidence, she warned That can be exacerbated by irrigation and growing successive or short rotation breaks between spinach crops where land availability is limited.

“It is essential growers have all the tools available for an integrated approach to preventing downy mildew losses. That starts with varietal resistance and is bolstered by an effective agronomy programme,” advised Rosemary. Growing spinach in combination with a good fungicide programme could help protect the value of varietal resistance in the longer term, by minimising development of new pathogen strains.

Spinach leaf spots can be caused by a number of different disease pathogens, including Peronospora effusa, Stemphyliumspecies., Cladosporium variabile and Colletotrichum dematium. These pathogens are not always monitored by EU authorities.

Syngenta has identified high resistance (HR) in the company’s genetic lines to at least one Stemphylium specie that was identified and isolated from many leafspot samples over recent years and across different EU countries.