Adopting synergistic practices will help farmers to achieve a productive, profitable and climate friendly future, according to speakers and exhibitors at the Cereals Event.

Returning as a physical event for the first time in two years on 30 June and 1 July, Cereals saw a wide range of speakers and exhibitors promoting progressive practices that will revolutionise the industry. “It was wonderful to welcome everyone back to the site at Boothby Graffoe, Lincolnshire,” said event organiser, Alli McEntyre.

“Events are such a positive way for the industry to engage, exchange knowledge and establish partnerships for the future. Everyone was excited to be back, discussing everything from carbon storage to business after BPS, and seeing live demos of autonomous tractors and seed spreading drones.”

Defra secretary George Eustice announced the new Sustainable Farming Incentive (SFI) rates in the AHDB Theatre on Wednesday (30 June): From spring 2022, farmers in England will be able to earn up to £70/ha to improve their soil health. 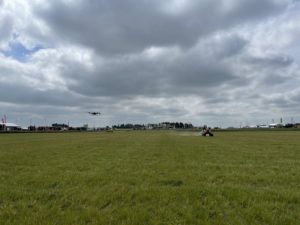 “Our soil can provide a great opportunity to store carbon, reduce emissions, and improve water quality and biodiversity,” he said. “That is why we want our future policies to support this movement. It’s going to start with incentivising farmers to be custodians of their soils.”

The SFI will consist of four different health standards: One on arable and horticultural soil, one on improved grassland, a third on moorland and rough grazing and a fourth on animal health and welfare. “If farmers get these things right it will improve their profitability,” said Mr Eustice.

Speaking on the second day of the event, Victoria Prentis, under secretary of state for Defra, voiced her agreement. “We are very keen to make the SFI as accessible as possible to as many farmers as we can – there is something in sustainable farming for pretty much everybody.”

NFU president, Minette Batters, also discussed the important role growers have to play in tackling climate change.  “As we look down the road to net zero, growers have a rare ability to fuel the bioeconomy and have a positive impact on decarbonisation within both farming and other sectors,” she said. “Our arable farmers are also uniquely placed to capture carbon through soil management, such as through green cover crops or reduced tillage systems, and it’s so important that government schemes such as the SFI properly incentivise, support and reward this type of work.

“But we can’t underestimate the challenges,” added Ms Batters. “One challenge we face is around building climate resilience, both on a national scale and on an individual farm basis to give our businesses the best chance of surviving and thriving in the future.”

According to Farmers Weekly’s editor, Andrew Meredith, there are going to be a lot of changes in the coming years. Speaking with Kaleb Cooper, of Clarkson’s Farm fame, at a Ceres Rural breakfast on day two, he said: “Andersons is predicting that by the end of the decade, 11,000 farming businesses will have disappeared. But I don’t think that means any farmland will go unfarmed, I think we will need people who are willing to do things in a different way.”

Creating synergies across farming businesses – whether through adapting current practices, collaboration, adopting technology or embracing new income streams – was a common theme in much of the seminar programme.

In the Synergistic Solutions seminar on day one, Helen Chesshire, senior farming adviser at the Woodland Trust, outlined how integrating forestry can create both ecological and economic benefits to farmers. “There are a wide range of benefits, but remember it’s like having another enterprise; you’ll need to put as much effort into your trees as you do your cereal rotation.” 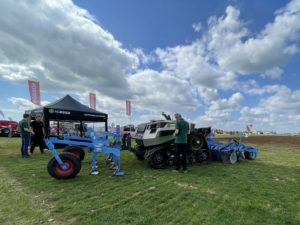 Out in the demo areas, the future of farming looked altogether different again, with the AgXeed autonomous AgBot cultivating a patch of the site, entirely independent of a driver. Visitors were also treated to UK-first demonstrations from the teams at Harper Adams University, Drone Ag, AutoSpray Systems and the British Drone Consortium. Their crop mapping, seeding and fertiliser spraying drones and unmanned ground vehicle worked in unison to demonstrate the capacity for new technology to provide autonomous zero carbon solutions which allow farmers to get on with other tasks. 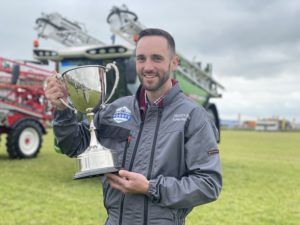 The Syngenta Sprays & Sprayers Arena also showcased the most accurate and efficient driven machines from the biggest names in the industry. And the Farm Sprayer Operator of the Year award went to Luke Haines from Stevens Farm, Kent, who impressed judges with his commitment to good communication and planning for timely application.

“Farming is without doubt changing apace and it’s vital that the whole industry stays abreast of the latest technology and advice,” said Ms McEntyre. “We have some of the best, most forward-thinking farmers in the world, and it was clear to me this week that the industry isn’t just meeting changing needs, it is chasing the future, ready to be productive, climate friendly and profitable.”