Signs of flag leaves emerging almost a month earlier than normal in some southern wheat crops have reinforced the importance of using regular field inspections not calendar date to determine spray timings.

Leading agronomy firm Hutchinsons has picked up on several reports of leaf one emerging, with Gallant, Skyfall and Cordiale highlighted as three particularly forward varieties around the Wash, in parts of south Essex and some areas south of London.

The unusually advanced nature of these crops is in stark contrast to others elsewhere that are struggling to get going in recent dry, cool conditions and creates considerable challenges for spring fungicide programmes, says technical development director David Ellerton.

“There is a huge variation in growth stages of winter wheat across the UK, with many late-sown crops struggling in dry soils. The majority of crops are around GS 32 with leaf three emerged or emerging, but the most backward are still at GS 30-31. Some seem to have stopped growing altogether.”

While many of the most advanced wheats were sown early and thrived during a mild autumn and winter, some later-sown crops are also showing signs of early flag leaf emergence. It is therefore unclear whether the exceptional development is due to the relatively mild growing period so far, or a stress reaction triggered by dry soil conditions.

Any growers with very advanced crops must be prepared to treat them as soon as the appropriate growth stage is reached, regardless of the calendar date, Dr Ellerton says.

“Flag leaf emergence in most crops will be around the usual timing of mid-May, but if it is out early you’ve got to protect it. Even if Septoria risk is currently relatively low in dry, cool conditions, the situation can quickly change, as we saw in 2012 when we went from drought to deluge (see Figure below). 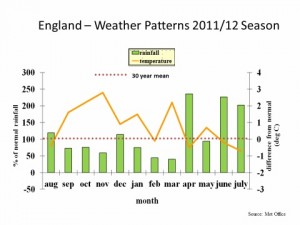 “It’s not worth the risk of delaying. In this situation missing the flag leaf timing will leave the most important leaves for yield production unprotected with huge implications for yield reductions.”

Dr Ellerton recommends applying a mixed T2 spray based on the varied modes of action of a multisite protectant, SDHI and triazole. Where flag leaf sprays are applied early he advises increasing the doses of the multisite and SDHI components to extend Septoria protection as far as possible and help bridge the gap through to harvest.

However, whatever rate or product is used, spray intervals should still not exceed three to four weeks, so early T2 application is likely to require an additional spray later in the programme to protect crops throughout the remaining growing period and avoid compromising yield, he adds.

“If crop growth slows down and extends the gap between flag leaf appearance and ear emergence, there may be a need for an interim spray between T2 and T3. If not, and crops remain very forward with ears also emerging early, these should be protected as normal with a T3 fungicide, and then an additional spray considered three to four weeks later.

“Fungicides don’t offer the same curative ability they once did, so it is essential crops are treated at the correct growth stage to avoid disease getting established.”

With growth stages more varied than ever this season, Dr Ellerton stresses the only sure way to accurately determine optimum fungicide timing is by walking fields and inspecting crops closely, not relying on calendar date.