Achieving high wheat yields and gaining a premium for grain is an attractive proposition as farm margins are squeezed. Group 3 soft wheats are said to be at risk of extinction after slowly losing their appeal with growers, largely due to a yield gap to barn filling feed wheats and falling premiums.

However, one grower in the Scottish Borders is defying this negativity and has taken biscuit wheat variety, Zulu, to consecutive bronze and silver awards in the ADAS Yield Enhancement Network (YEN) competition.

It was calculated to represent 78% of a potential of 18.1t/ha and saw the farm scoop bronze in the ‘Best Percentage of Potential Yield’ category.

The following year was a poorer year for wheat in the north, but the farm still achieved a respectable 11.9t/ha, 63.5% of an 18.6t/ha potential, and enough for a silver award.

Mr Fuller-Shapcott says the competition has been key in pushing yields of his Zulu wheats in recent seasons, with each entrant provided with a detailed report on their crop to highlight any areas that might need attention.

Although it sounds counter-intuitive, Mr Fuller-Shapcott figures that big flag leaves don’t necessarily lend themselves to optimum light capture, as they become too large and fold under their own weight. This renders half the leaf ineffective and shades out leaves lower down the canopy that could be contributing to building yield.

“Zulu doesn’t have a huge flag leaf, which is a good thing. Breeders need to be producing a variety that utilises all the plant for photosynthesis, not just rely on the top of the plant”.

The farm has always paid close attention to micronutrients, taking tissue tests seven to ten days ahead of the first three fungicide timings, allowing time to react to any deficiencies.

Long term tissue testing has consistently shown Mr Fuller-Shapcott’s wheats to be starved of manganese and copper and his YEN reports also uncovered a low spikelet count in 2015, which was linked to zinc deficiency.

“We corrected it for 2016 and the spikelet count was much higher,” he explains.

Crops now have a Kick-Off seed dressing, which contains phosphorus, manganese, potassium, nitrogen, zinc and sulphate and is supplemented by manganese-copper-zinc applications at T0, T1 and T2.

While balanced micro nutrition is important, macronutrients such as nitrogen are still the key driver of yield and the farm applies a layer manure ahead of drilling to get crops off to a good start.

Being inside a Nitrate Vulnerable Zone (NVZ), Mr Fuller-Shapcott has been unable to throw too much nitrogen at his crops, with 200kg N/ha his nominal limit.

However, he has used his target protein of 10.5% as justification to apply 233kg/ha in 2016 and hopes further evidence of yield potential through his YEN reports will justify an increase in the future.

“I am also going to try some foliar amino acid products next year to try and give the plants a bigger boost,” says Mr Fuller-Shapcott.

As light interception is so crucial to building high yields, keeping the crop as green as possible for as long as possible is a key goal.

Mr Fuller-Shapcott says a robust fungicide programme is required and he aims to stay in a protectant situation to keep the crop clean right down to the ground, maximising photosynthetic area.

He acknowledges Zulu has some disease weaknesses, with its yellow rust score falling to 6 in the ratings shake-up last year and its eyespot score at just 3, but both risks are covered proactively.

Last year, Eclipse was used alongside chlorothalonil at T0, with its azole component strong on yellow rust, whilst morpholine active fenpropimorph offers rust activity and tackles any mildew in the crop.

This was followed by a T1 made up of half rate of Nebula to boost eyespot and rust control, half rate Adexar to maintain good protection against septoria, plus multisite chlorothalonil.

The T2 was a combination of Eclipse, Priaxor and chlorothalonil, whilst an ear spray was applied in the form of a cost-effective tebuconazole spray.

“You have to remember that we are much more at risk of the weather limiting spraying opportunities in the north, so you need a punchy programme,” adds Mr Fuller-Shapcott.

“The strobilurins keep us ahead of the game with yellow rust, and the robust programme also keeps us in a protectant situation with septoria – if you miss timings, you are on a hiding to nothing without it”.

The other factor to bear in mind with Zulu is its height and when pushing the variety hard for yield – combined with an eyespot risk – it can be susceptible to lodging.

Despite this, Mr Fuller-Shapcott says it stood well in 2015 when yields were exceptional. However, the following year when potential was lower, he assumed he could trim rates of plant growth regulator (PGR) and as a result, some of the crop went flat.

“We use a split PGR programme of Canopy at T0 and Canopy plus chlormequat at T1, but we should have been more robust with the first dose of Canopy last year. It is definitely something to bear in mind,” he explains.

Growing the top yielding winter wheats on the Recommended List is not a priority for David Fuller-Shapcott, instead prioritising potential market opportunities when choosing varieties.

As a result, his farm has been growing biscuit wheats for many years and Zulu now dominates his area, offering a potential premium with biscuit makers, distillers or bioethanol plants, plus a strong regional performance of 102% in the north.

All the grain is produced on contract for local merchants Frontier or WN Lindsay, with a biscuit premium paid if quality parameters are met. Any grain failing to make the spec is sold for distilling purposes.

“Our strategy is to grow everything for a known market, rather than growing it and selling after,” he explains.

Mr Fuller-Shapcott adds that biscuit wheats have an attractive premium versus risk ratio, as he doesn’t need to invest excessively to hit the required 10.5% protein.

As a result, he won’t be heavily penalised if the weather turns against him in the late summer to erode Hagberg Falling Numbers and elevate fusarium risk, so it is a low risk way of growing a premium crop.

“There is more choice from the soft Group 4s but premiums are lower, so we look for a low risk Group 3, as we can’t always get the sprays on exactly when we need to.” 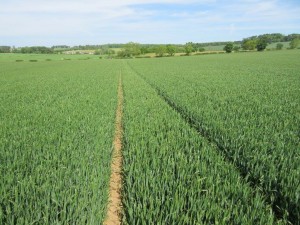