Grass seed can be a valuable and viable alternative to other break crops and demand for the product is increasing. After eight years growing grass seeds, Kent farmer Tom Reynolds is convinced of the crop’s value to his rotation.

“We want to improve soil structure and fertility and grass is a great way of doing both,” says Mr Reynolds, who manages 250ha of mixed crops from Pent Farm, near Postling.

“Another reason for growing grass seeds is to reduce our reliance on agrochemicals and generally reduce inputs across the whole rotation.”

Blackgrass control is another a key focus. The two-year grass seeds break, which includes grazing and silage cuts, helps achieve this with minimal chemical inputs.

Growing two-year leys has also halved cultivations on the grassed area, slashing field and machinery costs while easing drilling pressure in the autumn and reducing the potential for soil damage.

Mr Reynolds concentrates on forage species, growing 38ha of hybrid ryegrass and 30ha of Italian ryegrass. A 30ha block of amenity red fescue grass is due to be replaced with ryegrass.

RGT Cordial, a hybrid tetraploid variety, helps the farm’s zero-tolerance approach to blackgrass thanks to its aggressive growth habit which smothers the competition. The variety’s exceptional disease resistance has made it a favourite in seed mixtures across the country, helped by its persistence and high forage yields. 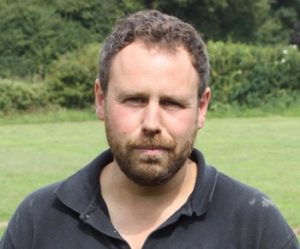 Grass seed management is relatively straightforward. Ryegrass is drilled with minimum soil disturbance in late summer and DAP is applied if needed.

Apart from an application of ethofumesate when required and 120kg/ha of nitrogen in early spring, the crop is left alone until late April or early May when a cut of silage is taken.

A further 90kg/ha of nitrogen is applied to the aftermath, along with a fungicide to control rust as necessary. Seed is combined using a stripper header, which has revolutionised harvesting.

The crop is then grazed over winter before being closed up for the next silage cut ahead of the final seed harvest.

Blackgrass control has been very successful. “We take the silage cut before blackgrass sets a seed head, which is key,” says Mr Reynolds. “We sometimes also take an early autumn cut, so this and grazing gives plenty of opportunity for cultural control.”

Direct-drilled beans or wheat are sown after grass seeds. “Beans widen the window for control of volunteer ryegrass and any surviving weed grasses,” he explains.

Many growers believe grass seeds are a difficult crop, but managed correctly they can be a very valuable addition to the rotation, he says. “We’ve certainly found that the benefits far outweigh the negatives.”

Growers with severe grassweed burdens cannot produce grass for seed, but can of course grow it for silage and grazing, achieving the same cultural control benefits.

Low levels of blackgrass and brome may be permitted in forage varieties grown for seed. “We prefer clean land, but we can cope with low levels of these weeds by using good cultural techniques and ethofumesate,” says Mr Bourne.

“Growers can reduce the problem by managing stubbles before sowing grass seeds and using minimum disturbance establishment techniques to avoid mixing weed seeds through the profile.

“With hybrid and Italian ryegrasses, a silage cut is taken usually around the end of April, while perennial ryegrass is grazed to the end of March. This defoliation encourages the crop to put more energy into seed production and ensures there is not too much foliage at harvest.

“Herbicide-resistant Italian ryegrass has been found in parts of Kent since the 1980s. Although in the background, it has brought resistance through to relatively recent herbicides.

“We assess all fields carefully before going into seed production as we cannot run any risk of contamination.”

Some potential growers are worried about introducing grass into an arable rotation, fearing volunteers may eventually morph into resistant weeds.

“We don’t see any problem with this,” says Mr Bourne. “Resistance in grass species generally occurs due to poor management over a period of time, and can be avoided provided you employ good practice from the start.

“For example, take care managing stale seedbeds. Don’t rush in after the combine as ryegrass seed will become dormant if you bury it.

“Leave it to flush and then spray off before drilling the next crop with as little soil disturbance as possible. Appropriate herbicide programmes will finish the job in following arable crops.”

Mr Reynolds agrees. “We don’t have any resistant ryegrass on the farm and we intend to keep it that way, as it would make seed production very difficult.

“Resistant ryegrass could come in from other sources, so we keep a very close eye on that. As far as our own crop is concerned, our system of stale seedbed management and minimal disturbance cultivation methods, coupled with good practice across the rotation, has proved very effective at controlling volunteers.

“They don’t survive long enough to pose a threat – if they did, we wouldn’t be growing the crop.”

The UK is only 40% self sufficient in grass seed production, leaving plenty of room for expansion particularly as countries like Denmark, Germany and Holland are diverting grassland into conservation schemes.

“UK growers are waking up to this demand, and rotational necessity is also driving change,” says Mr Bourne.

RAGT is expanding production to help meet that demand. Its extensive grass-breeding programme in France creates a portfolio of varieties suited to different climates and soil types. The best are put into pre-NL screening sites across the UK.

RAGT’s high-yielding diploid and tetraploid varieties have excellent quality and persistence and some of the best disease resistance scores on the market, and there is plenty of promising new material in the pipeline.

Several varieties are delegated to other companies for production, while an increasing number bear the RAGT name and can be found in merchant’s mixtures across the country.

“We are looking for new grass seed producers this autumn, whether growing 5ha or 50ha,” says Helen Wilson, RAGT’s head of forage crops.

“Equally, if you are not currently using RAGT varieties in your grass seed mixtures and would like some more information, we’d be happy to hear from you.”