Even in the absence of soil diseases, results from a new independent study have shown that sowing winter wheat seed protected with the specialist SDHI fungicide seed treatment, sedaxane, can lead to longer roots, greener leaves and increased yield.

Conducted by Dr Tudor Dawkins as part of a master’s degree with the University of Warwick, the study tracked the development of winter wheat plants raised from treated and untreated seed on a sterile growing medium in the glasshouse, where disease could be excluded.

Compared with untreated seed, seeds protected with sedaxane, the SDHI in the seed treatment Vibrance Duo (sedaxane + fludioxonil), not only showed a trend to enhanced emergence in the absence of disease, but also a significant 28% increase in seedling root length, a significant increase in the length of the seedling’s first leaf, and a small increase in leaf greenness.

Moreover, the benefits from the sedaxane seed treatment continued long enough to give a significant increase in yield per pot, which was equivalent to an increase of 1.4 t/ha, Dr Dawkins calculated.

“The glasshouse tests revealed the rate of seedling establishment was enhanced where seeds were treated with sedaxane,” says Dr Dawkins. “This has been observed in the field on numerous occasions, but in this instance the growing medium was sterile, so the enhanced emergence could not be due to the control of soil pathogens.

“In addition, the maximum root length recorded on 23 October for wheat seedlings grown from seed treated with sedaxane was 37.15 cm, compared to the untreated which was 29.05 cm. This was a statistically significant difference.”

Following these improvements, Dr Dawkins says the component most likely to explain the 1.4 t/ha yield uplift with the treatment was the number of grains per ear. This averaged 41.5 in plants grown using sedaxane-treated seed versus just 35.1 grains per ear in untreated plants. Consistent with this, he says ear length and grain weight per ear were also statistically greater with the sedaxane treatment, while individual grain weight was not affected by the seed treatment. 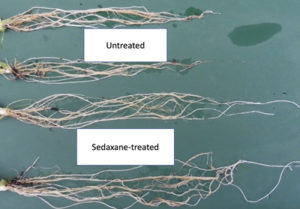 “Preliminary indications suggested that the better root development from sedaxane created better water extraction rates in the plants that developed from the treated seed and that the leaves were greener. These combined observations persisted to at least GS37, which probably contributed to the observed yield increase,” Dr Dawkins explains.

Commenting on the findings, Dr Jonathan Ronksley, technical manager for crop protection and seeds business Syngenta, which sponsored the work, said: “These latest independent findings add to the database of results on sedaxane. These show improved establishment, rooting and yield where sedaxane has been applied to the seed of wheat and barley, either alone or in a Vibrance Duo-based approach.

“Better root structures provide a key foundation for yield, and sedaxane is an SDHI fungicide that has been specially selected for its seed treatment benefits. It is not available as a foliar fungicide.”