For oilseed rape growers in club root infected areas looking for high yields and to protect themselves against Turnip Yellows Virus (TuYV) and pod shatter, there’s only one variety that offers this, LG Anarion.

LG Anarion is the first Clubroot resistant variety to offer high yields, which is secured by a range of valuable genetic traits including TuYV, pod shatter and RLM 7 resistance, and is available to UK growers for the coming season.

“This is a really exciting development for growers of oilseed rape in Clubroot infected areas,” says Will Charlton, Limagrain’s arable marketing manager.

“Possession of these traits provides much needed on-farm security to growers who are looking to improve their profits from oilseed rape, in areas that have until now, been challenging as a result of Clubroot.”

Clubroot typically causes losses of 0.3t/ha for every 10% of plants affected. The disease is becoming far more widespread across the UK, spreading into areas such as Somerset and Derbyshire, and is no longer confined to the wetter regions such as the north-west.

“In our UK breeding trials we saw that LG Anarion showed an 11% yield increase over our current clubroot variety, Alasco, and 5% over other leading club root varieties; representing a significant improvement and further closing of the yield gap associated with Clubroot resistance. We’ve also seen strong performance in independent trials”

“We know that TuYV can knock yields by as much as 30% and infection is difficult to prevent with foliar insecticides alone. Limagrain were the first to introduce TuYV resistance with the variety Amalie in 2014 and the trait is now a staple of our high yielding hybrids,” says Mr Wilkinson.

“LG Anarion also offers pod shatter resistance; a trait which has recently had its importance acknowledged by the AHDB with its inclusion on the recommended list. Pod Shatter resistance can help secure yields and prevent untimely seed losses if there is inclement weather around harvest.” 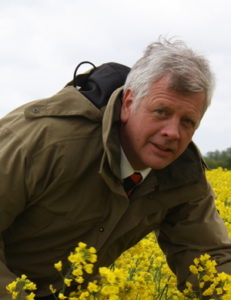 It also protects from losses during harvest (as the header hits the crop), as well as reducing the number of volunteers in the following crop.

Other traits stacked into LG Anarion include the RLM7 phoma resistance gene, which provides stable resistance scores of 7 or 8; Limagrain does not offer varieties with a light leaf spot score of below 6.

Agronomically there is much to like about LG Anarion, notes Mr Wilkinson.

“It offers good disease resistance with our breeding data suggesting ratings of 6 for Light Leaf Spot, 6+ for phoma and a good tolerance to verticillium.”

“It has early-mid flowering and maturity, and good ratings for stem stiffness and lodging.”

“The variety has very strong autumn dynamic growth with fast biomass accumulation and then sits in the winter, so it does not get too ahead of itself. It exhibits very good winter hardiness, which means it can cope with more challenging winter conditions.”

It’s important that growers are alert to the threat that Clubroot poses and are in a position to counter it as best as possible by identifying areas at most risk and targeting them with integrated cultural control strategies, says Agrii seed specialist, David Leaper.

Varietal resistance to Clubroot should only be used as one element of the management programme, he says. “All clubroot resistant varieties share the same source of resistance so we should not over rely on it.”

For sites at risk of club root, key elements of cultural control should encompass.