BTS 3325 is a newly recommended variety for the 2018 season that offers growers the opportunity to grow a high yielding sugar beet variety with low bolting figures – offering flexibility in sowing for both the early and later drilling slots.

Choosing a new sugar beet variety is no longer just about output, agronomic characteristics such as bolting tolerance and disease resistance are becoming increasingly important characteristics to consider, which is why the recommended list now requires varieties to perform well in these categories over three years of field trials, “says Bram van der Have, sugar beet consultant for Limagrain.

BTS 3325 is high yielding (Adjusted tonnes 103.0%) rhizomania tolerant variety offering very high sugar content of 18.1%, which is one of the highest on the BBRO Recommended List, making it a very attractive proposition for growers and end-users alike.

“However what make BTS 3325 so exciting is that alongside this higher output, BTS 3325 has also demonstrated a very low ESB (Early sown Bolting) score –one of the lowest on the RL in this slot. “

“It is likely to appeal to growers who are in a position to drill on or before the 5 March, so it’s the ideal variety choice to start the beet sowing period, but it is also flexible enough to be sown later, without compromising its high yield and sugar content. “

Recommended last year, BTS 860 was one of the most popular beet varieties sown in 2017 due its high yield potential and agronomic performance,  across a range of soil types and growing conditions.

“It’s all very well to opt for today’s top yielder on the recommended list, but will it be next year’s too?”  says Mr van der Have. “Consistency in performance is equally, if not more important than topping the yield table.  One can budget on consistency but only gamble on the top yield.”

BTS 860 has shown itself to be a very consistent performer that offers very high yield at 103.9% of controls, alongside one of the highest sugar contents on the Recommended List at 18.1%, which makes it a very attractive variety for professional sugar beet growers looking to meet the high requirements of sugar processors.

“BTS 860 is likely to appeal to the vast majority of sugar beet growers who find crops perform best when drilled during the conventional sugar beet drilling slot which our Betaseed breeders define as from the 2nd week of March until the end of the drilling period,” says Mr Bram van der Have.

During this ‘normal sowing time’, BTS 860 has one of the lowest scores for tendency to bolt.  “Or to sum up BTS 860 drilling virtues, it offers flexible sowing and is suitable for early, normal and late sowing.”

Variety choice based on drilling time versus output

Based on when sugar beet crops are sown, Limagrain UK suggests that UK growers can be split into three categories;  those that are happy to drill very early, those that are risk averse but looking for high yields, and those that  are less risk averse and prepared to drill later and take the risk of higher bolting. (See graph)

Depending on which category a grower sits in, it’s important to consider how varieties can support the best performance in that specific sector, says Ron Granger, arable technical manager for Limagrain.

“Early growers are considered to be those that are prepared to drill sugar beet as soon as conditions allow – end February onwards generally. Growers in this sector need varieties with good bolting resistance an important genetic trait offering crop security usually at the expense of yield.”

“However, you can see how the introduction of BTS 3325 bucks this trend.”

“The largest sector of sugar beet growers in the UK are those that are looking for high yields combined with lower bolting characteristics, which means that they look to sow their beet only when conditions are suitable which is usually mid-March onwards.

The last group of growers are associated with wanting to grow higher yields, and are prepared to compromise this with higher bolting figures associated with delayed drilling. Our variety BTS 470 sits well in this slot.” 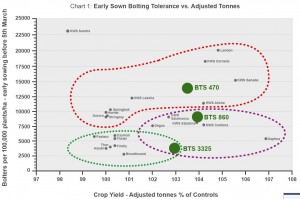