Haith has this month marked 21 years of working with R S Cockerill.

The anniversary coincides with the completion of £3m investment into the Yorkshire potato grower and packer’s site in Dunnington, near York.

This latest project – the installation of four new grading lines, has been part-funded by an EU Productivity Grant and is the 42nd order that R S Cockerill has awarded to Haith.

R S Cockerill was established in the 1930s by Ronald S. Cockerill, who grew carrots on a rented plot. Potato and carrot trading operations developed alongside farming activities following the acquisition of a farm tenancy near York.

Martin Cockerill, the present chairman and son of the founder, joined the company in 1967. Since then, he has overseen the development of an agro-chemical distribution and aerial crop spraying service alongside the fresh potato pre-pack business, which serves retail multiples and wholesalers. The company started supplying potatoes on contract to Tudor Crisps, later becoming Smiths Crisps and then Walkers, which is still a major customer today.

“Our relationship dates back to the year 2000 when Martin Cockerill placed an order for our first grading line. Things have changed a lot in 21 years, with some amazing advances in technology, but one thing has remained the same, and that is, at the end of the day, people buy from people, and we still get along with everyone at Haith exceptionally well. They deliver what they say they will and are always open and honest, which we appreciate,” says Rufus Pilgrim, Managing Director at R S Cockerill. “We have an excellent relationship with the team at Haith, and the service and standard of the machines we receive from them are second to none. 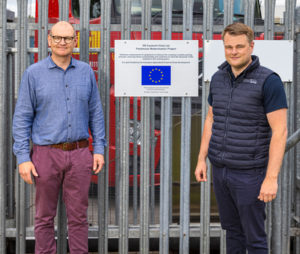 “This latest project ran very smoothly from start to finish, helped enormously by the great relationship that John Robinson, R S Cockerill’s Engineering Manager and David Elvidge, Operations Manager, have with the design, planning and installation teams at Haith. This investment has allowed us to improve our flexibility and productivity and futureproof our business.”

Over the last 21 years, both Haith and Cockerill’s have grown considerably. “It is very satisfying to see that both companies have continued to grow in the years that we have worked together,” says Duane Hill, Sales Director for Haith. “We are very grateful to Martin Cockerill’s continued loyalty to Haith, and we like to think that our machines have played a part in their continued success.”