A new top yielding, early maturing winter barley variety with high levels of tolerance to barley yellow dwarf virus (BYDV) and resistance to mosaic viruses (BYMV1 + 2) and a high yielding oilseed rape, are being launched by DSV at the virtual Cereals 2020 event.

“Sensation is the world’s first winter barley variety combining tolerance to BYDV and resistance to BYMV strains 1 and 2 which is a real achievement of plant breeding and will be of real benefit to growers as such diseases take a greater hold in the UK.

“Recent revocation of many insecticides and growing resistance in the aphid vector population to the remaining chemistry we have at our disposal is meaning transmission of such viruses is increasingly difficult to control.

“Like with TuYV in oilseed rape, many entomologists and agronomists are very concerned about a significant rise in BYDV in the future and genetic tolerance is about the only effective way to control this.

“In nearly all varieties the BYMV 1 resistance is standard but it is very unusual to have this combined with resistance to BYMV strain 2.”

Apart from the tolerance to BYDV and resistance to BYMV1 + 2, Sensation is proving to be a strong six-row performer with a good disease resistance package, Sarah Hawthorne adds.

“As well as a high specific weight, Sensation also has outstanding spring vigour potentially making it one of the most competitive varieties against blackgrass currently available.

“Sensation also comes to head up to 5 days earlier than other popular BYDV varieties and has delivered excellent untreated yields with exceptional resistance to lodging.”

Sensation is now starting its journey through the UK testing system with limited amounts available for drilling in autumn 2020. 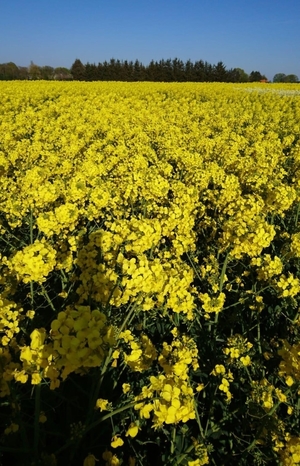 “Voltage has a gross margin of 108.1 % of control in the key East and West region, oil content of 45.5%, TuYV resistance plus the highest Light Leaf Spot score of all new candidates, which makes it a near perfect option for growers.

“Voltage combines the very best features of current high performing oilseed rape varieties from production and economic viewpoints and puts them in a single package that has genuine UK-wide versatility.

“As well as a gross margin of 104.9% of control for the UK as a whole, Voltage’s hybrid PNN (post-neonicotinoid) genetics gives it exceptional autumn and spring vigour and a Light Leaf Spot score gives of 7.3 makes it ideally suited for Northern conditions.”

Scores of 8.3 for lodging, 8.0 for stem stiffness and a relatively compact height of 158cm mean it will be a resilient variety able to withstand the range of growing conditions often experienced in the UK, she adds.

“Voltage will be a good first choice oilseed rape variety for most producers in the UK based on its reliability and high production potential but its TuYV resistance could make it even more attractive in the future.”