Just when you would assume the potential risk from BYDV is receding, it is doing the exact opposite, warns Neil Watson, technical support manager for Hutchinsons.

The mild autumn conditions are extending the period of infection later into the year than would normally be expected, he points out. “The mild nights as well as the warm days are allowing for rapid multiplication – aphids can still take flight above 11 °C and this is what we are seeing in the field.”

Mr Watson notes that this is not yet being picked up from the suction trap data which might be partly due to the inevitable delay in collecting the data and getting it published.

However he reminds growers that the smaller the relative size of the crop infected the greater the impact on yield due to the lack of ability to compensate unlike a larger plant with plenty of tillers.

“This risk is normally the preserve of the early drilled crops with emergence coinciding with infection, yet this season it is the later drilled crops at risk as a result of the relatively wet October and resurgence of invading aphids.”

He warns that it could mean it is time for a follow up spray for the more advanced crops.

“Yet again, some of the surveys carried out suggest a relatively high proportion of aphids landing in the crop are also carrying virus. “

“There is also some noticeable interaction coming into play from crop colour,” he notes. 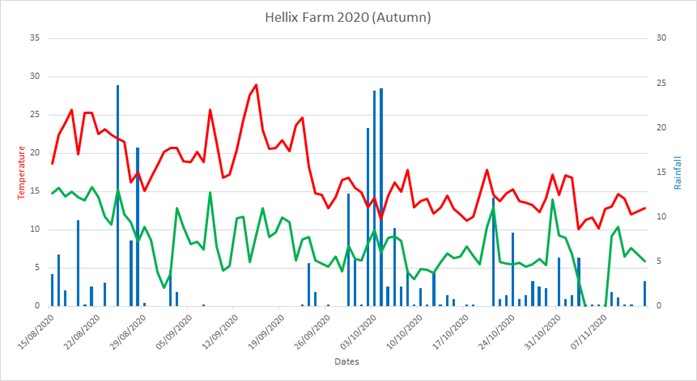 “The paler the plant the more likelihood aphids are being attracted to them. We know this is a real factor from previous studies where invading aphids are naturally draw to already infected individual plants, which enhances virus spread within the crop.”

He believes that the pale colouration this year could be as a consequence of nutritional shortages in newly emerged plants, or even the likes of volunteers oats with an wheat crop, of which there is plenty about this year, due to server shedding prior to harvest.

“This underlines the importance of being ahead of any potential deficiencies and keeping the crop as healthy as possible.”

“Once aphids have been observed within the crop, start counting for the 170-day degree spray threshold,” he says. “The exception is if large numbers are seen feeding on the crop, spray immediately, then start counting once reinvasion occurs.”

He notes that it is important to recognise that frosts cannot be relied on to kill these aphids.

“Firstly we have had very few so far this autumn and more significantly, the grain aphid needs frost below -5°C to kill half the population! Even with regards to the rose grain aphid this figure is -0.5 °C.”

Knowing exactly when is the right time to spray for optimum control is vital, says David Howard, Hutchinsons head of ICM. He recommends using the BYDV model in Omnia to map out predicted spray dates from when aphids are first seen in crops.

“It does this by using highly localised weather data in combination with cropping data already entered into Omnia to make treatment timings as accurate as they can be – on a field by field basis.”

“The graph accrues thermal time and as it reaches 150-day degrees, it shows up as a warning period to alert growers that they’re approaching a key risk period.“

“An email alert can be set by the user at a time dictated by themselves, say 3 days before for example.”

“This becomes particularly important where drilling is protracted or in years like this where there has been a degree of early drilling followed by a second period of much later drilling across many farms.”

“The model provides a report to illustrate the levels of risk across the whole season and associated treatments, which will become increasingly useful when it comes to justifying decision making in the future.”