With Covid-19 restrictions damaging prospects of a traditional graduation ceremony in 2020, John Deere’s training team came up with an alternative plan. Each graduate had their own individual ceremony at their employing dealership, where they were presented with a specially created hamper and their graduation certificate.

The runners-up were William Anderson of J&S Montgomery, Beith and William Smith of Tallis Amos Group, Bibury, who each received high street vouchers worth £250.

These annual awards are based on the trainees’ consistently high standards of work, both at their dealerships and at the training centre, over the three years of the apprenticeship.

“Successfully completing an apprenticeship is an achievement that deserves proper recognition and we were determined that these graduates should not miss out,” says John Deere Limited training centre manager Allan Cochran. 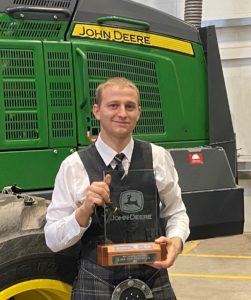 “Once we settled on hampers we decided to make up these special prizes ourselves. Sourcing produce near to our Langar headquarters enabled us to help support local businesses during the pandemic. We used the John Deere overnight parts distribution network to deliver the hampers and certificates to the sponsoring dealers, so that all the graduates could be presented with their awards on the same day.”

Tech Apprentice of the Year Matthew McPherson was the first trainee from John Deere Forestry to join the apprenticeship scheme in 2016. A combination of workshop and in-the-field training enabled Matthew to progress very quickly to the role of field service engineer, a position he has held since 2018.

In subsequent years qualified technicians undergo further education and adult training within the John Deere University programme, on a career path that can ultimately lead to the highest possible LTA Master Technician accreditation.

New student intakes are in September each year; apprentices need to be a UK resident, sponsored by a John Deere dealer and aged 16 or over. The standard programmes include on-the-job training and assessment as well as eight weeks each year at the John Deere Apprentice Training Centre, when possible. Further details of the various programmes can be found at https://apprenticeshipfinder.co.uk/john-deere.

Now in its 29th year, Ag Tech was the first such scheme to be introduced in the UK and won a National Training Award at the end of 1997, the only one ever made to an agricultural machinery apprenticeship programme. Since the first programme started in 1992, almost 850 apprentices have graduated through the three main schemes and are now working in the company’s nationwide dealer network.