For the past three years, the Syngenta Sustainable Farming Initiative has been working in partnership with the GWCT’s Allerton Project and NIAB to assess the impact of differing cultivation types on key financial and environmental metrics to more accurately quantify the effects of moving towards Conservation Agriculture. At this halfway point of the five-year project, some important and intriguing results have begun to emerge, which were presented at Cereals 2021 in Lincolnshire this month.

Trials are conducted on the heavy soils of the Allerton Project’s Loddington site, in Leicestershire and a comparative light-land farm at Lenham in Kent. A conventional plough-based system is being trialled alongside minimum-cultivation and direct drilling across a rotation of barley, oilseed rape, wheat, beans and wheat.

On the financial side, the data shows that direct drilling has resulted in reductions in fuel usage of between 50-65%, while work rates over the ploughed system are around 50% improved. This has driven operational cost improvements of some £8-£10/ha.

However, crop establishment has suffered – especially in the challenging soils at Loddington – with a drop of around 8% helping contribute to an overall reduction in both yield and grain margin/ha of 9%.

Nevertheless, net profit/ha at Loddington has so far increased by 5%, and by an impressive 18% at Lenham.

On the environmental front, bird sightings at both farms were seen to double in a direct-drilling system, while earthworm numbers were also up. Soil greenhouse gas emissions were seen to drop by 16-17% at both sites, and the overall carbon footprint of the cropped area by some 10%. 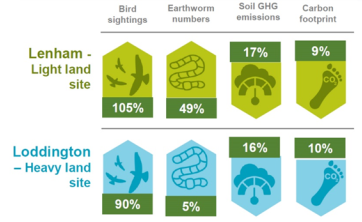 With the Basic Payment Scheme due to be phased out by 2027, and given the challenges of an increasingly extreme climate, it has never been more vital for farmers to reduce costs and boost the resilience of their farming systems. Furthermore, the dramatically improved work rate of the reduced tillage system offers a clear attraction to farm businesses needing to capitalise on increasingly narrow weather windows. Financially, the key metric in this interim report is the net profit/ha which has improved in both sites through conservation tillage techniques. Despite decreased yields, cost savings have increased this vital figure adding profitability to farm operations – though this isn’t to deny the greater challenges represented by heavy land in this transition. Consideration must also be given to the costs of replacing existing equipment.

The story is similarly positive on the environmental front, with biodiversity increasing, the ever-important metric of worm numbers moving in the right direction under reduced tillage in order to help improve soil health, and the carbon footprint of the food thus produced also significantly declining. This indicates that Conservation Agriculture will likely play a key part in the move towards nature-friendly, climate-friendly farming.

Taken in the round, these initial results are very encouraging given the direction of travel of UK agriculture and the increasing emphasis on margin, environmental assets, and soil carbon. It’s also notable that for the first time, farmers have independent scientific data directly addressing the complex interaction between economic performance and environmental impacts of a move towards reduced tillage on a field scale. Although there have undoubtedly been challenges, we look forward to the final results at the end of the trial and what they will tell us for the road ahead.