“When deciding to grow Miscanthus we were mindful of the ‘net zero’ ambitions of agriculture and the need for every farm business to take an honest look at its carbon footprint, so with the crop’s carbon sequestration potential and undeniable wildlife benefits, the investment was justifiable,” explains Mr Mullock.

“Having discussed the merits of growing Miscanthus with my agronomist we agreed it was a good opportunity to ‘put something back’,” he says.

Mr Mullock planted 36 ha of Miscanthus in Spring 2020 and the crop is looking healthy. “Aesthetically it looks remarkable when it’s senescing and it’s very satisfying to watch it grow through the seasons.

“The 36 ha we planted is part of a larger traditional arable rotation, and with the increased challenges of growing oil seed rape, Miscanthus should bring a lot of positives to the business,” says Mr Mullock. 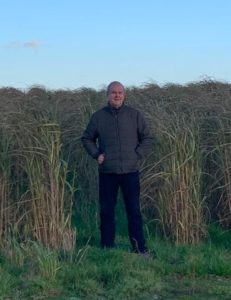 Mr Mullock recently removed a 16-year-old Miscanthus crop and has seen improvements in the soil. “We were pleased to see how fertile the two difficult fields have become. As you might expect, the organic matter readings are now high and the soil is alive again.”

He explains that the new Terravesta AthenaTM crop looks better than his previous Miscanthus giganteus planted in 2005. “Having had previous experience of growing the crop on heavy clay ground 16 years ago it was clear this last spring just how much the planting process and varieties have improved.”

Terravesta AthenaTM is an outstanding Miscanthus variety, delivering a higher yield than standard Miscanthus giganteus, it’s also more uniform so yields are more stable and the biomass quality improved. The variety has undergone rigorous selection and development to ensure that it’s tolerant to different growing conditions.

Mr Mullock has a long-term contract with Miscanthus specialist, Terravesta, and will receive index -linked, fixed-price income annually from the crop after the first harvest in year two. Terravesta assists farmers with Terravesta AthenaTM planting, agronomic support through the crop’s life, they buy-back the harvested bales each year and supply a growing number of markets including large scale power generation, livestock and equine bedding, domestic eco-fuels and emerging markets.

“I do believe the cane has further end-use potential, and I hope that farmers will be rewarded for storing carbon on their farms, with added potential for carbon trading in future,” adds Mr Mullock.