A new, top-yielding winter wheat variety that could also help growers respond to a number of present-day disease, weed and pest challenges is being launched for this autumn. 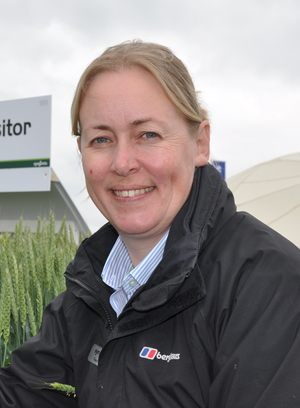 SY Insitor, from Syngenta, has the highest UK treated yield figure of all 11 hard Group 4 winter feed wheat varieties on the AHDB Recommended List for 2020/21, says Tracy Creasy, Syngenta marketing manager for conventional cereals – yielding equivalent to 11.76 t/ha. Hard Group 4 remains a popular choice among growers, she says, with about a third of the wheat market in this category.

But more than that, SY Insitor combines its high yield with a robust resistance rating of 6.6 against the major disease, Septoria tritici. Plus, it has achieved exceptionally high yields without being drilled early, she points out.

“All these features make SY Insitor an ideal fit as growers prepare themselves for dealing with Septoria and other modern-day challenges such as black-grass and barley yellow dwarf virus (BYDV),” says Mrs Creasy. “These challenges can be more severe in early-drilled crops.

“Next season will be the first full season for many years that growers will have to contend with Septoria tritici without the benefit of the multi-site fungicide, chlorothalonil for tackling resistance.

“Added to that, a neonicotinoid seed treatment can no longer be used against BYDV-carrying aphids, and black-grass remains a major threat.

“All of these problems can be reduced with later drilling. For example, 80% of black-grass typically germinates between August and October, and aphid numbers start declining during October. With this in mind, selecting an appropriate variety for delayed drilling becomes more critical. Although SY Insitor can be drilled from mid-September, trials show it delivers excellent yields when drilled much later which makes it a strong option where delayed drilling is adopted.”

According to wheat seed technical expert for Syngenta, Matt Bull, other big attractions for growing SY Insitor are that it delivers unbeaten treated yields among hard Group 4 winter feed wheats in all three regions on the AHDB Recommended List. Across five Syngenta variety evaluation trials in different locations last season, it also produced the highest average yield of more than 20 varieties tested, at over 12.5 t/ha, he notes.

“SY Insitor also combines its very high yields with excellent grain quality,” says Mr Bull. “It has a specific weight of 78.3 kg/hl on the AHDB Recommended List, which is well above the 74 kg/hl threshold often required for feed wheat.

“It also has resistance to orange wheat blossom midge, plus a good untreated yield equivalent to 9.2 t/ha. Importantly, SY Insitor also performs well as a first or second cereal and on different soil types.

“With a reducing arsenal of crop protection chemistry available, varieties with good agronomic characteristics that can help growers to compensate are set to be increasingly important,” Mr Bull adds.