Adam Silvester of WA Silvester Ltd, Dunhampton Farm, near Droitwich in Worcestershire signed up to Omnia’s current free access offer and as the 1000th registered user, now finds himself in the lucky position of having won a year’s free use of the entire Omnia system.

Omnia is a web based decision support platform that imports new and existing field data from multiple sources using multi-dimensional analysis- which is what makes it unique. Omnia is available through 3 different service levels:

Farming 550ha’s of combinable crops, alongside a suckler herd, Mr Silvester is no stranger to precision farming. “Back in 2008 we started to use the John Deere guidance system which was then linked to Gatekeeper. We then moved onto yield mapping and began variable rate applications of P&K.”

“We have also tried variable rate nitrogen, but with mixed results, although it certainly helped to tick all the necessary boxes for compliance.”

Having seen a demo of Omnia at an open day last year, Adam was interested in finding out more as he liked the fact that its possible to build up different layers of sub field information, and that the system was easy and intuitive to use.

“We have a new Sumo DTS drill which has been unlocked for variable rate applications so the plan is to build up mapping layers within Omnia that will allow us to generate more accurate variable rate maps.”

Now that he has a years’ free access to the system, Adam is looking forward to trying the various other tools available through Omnia  such as the recently launched climate module, cost of production and yield performance mapping. He will work through this with his Hutchinsons agronomist Jenny Lee. 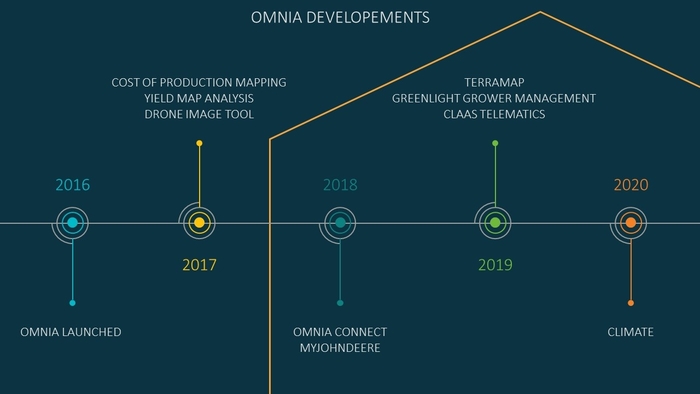 “Over the last 6 years, Omnia has led the way in bringing new innovative tools to market that help growers and agronomists use precision farming  to make meaningful management decisions on farms – be that for large arable units or on smaller mixed farms,” says Nick Strelczuk, precision technology specialist for Hutchinsons, who introduced Mr Silvester to Omnia.

“The intention behind Omnia was to bring precision farming and agronomy closer together, and move away from the traditional concept of precision farming as a  data collection tool –  and we very much believe that this has been achieved. The work doesn’t stop here; we look forward to launching our next exciting development later this year.”