The information-rich webinar brought together the latest research, highlighting the evidence that underpins advice for the coming weeks and months. A lively Q&A followed, with viewers quizzing the renowned weed biology specialist.

“Normally we’d be giving growers one-on-one facetime with the experts on the Black-grass Bus tour and at our demonstration sites.  Obviously, we can’t do that this year so the webinars, as part of the Real Results Virtual Farm, give farmers similar opportunities without the travel time and costs, from the comfort of their homes.”

With a very mixed picture, even at local levels, John focussed his attention on how growers can tackle grass-weeds now and in the near future.

“Essentially growers have two choices,” he summarised. “Stop seeds at source, or manage any freshly shed seed in the following crop. For now, the priority has to be monitoring and mapping problems in this seasons’ crops to inform next year’s decision making.”

“Keep your eye on other grass-weed populations too,” warned John, noting that changing agronomic practices to control black-grass will inevitably select for other grass-weed species, some of which are growing herbicide resistance.

“With 80% of black-grass samples from across the country showing resistance to mesosulfuron, fenoxaprop and cycloxydim, BGRi’s most recent report supports ADAS BASF findings; there is ubiquitous and widespread resistance in black-grass.”

“More recently we’ve confirmation of shifts in flufenacet sensitivity in field populations too. It’s a very worrying development,” he said.

In a study conducted jointly with BASF, Bayer and Syngenta, a sample of “problematic” Italian rye-grass showed variable sensitivity to fluenacet and pendimethalin. 50% of the sample had resistance to Axial (pinoxaden) and Atlantis (mesosulfuron and iodosulfuron). 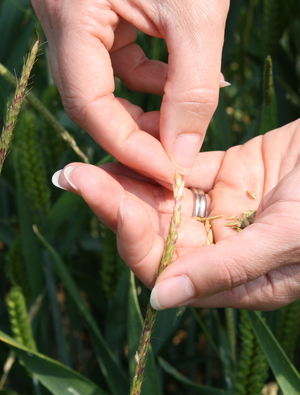 “The take-home message here is to keep a close eye on populations of all grass-weeds,” advises John. “There’s no doubt, we’re seeing a few plants here and there become much bigger patches in fields.  If you don’t have these weeds at the moment, it’s well-worth keeping an eye out for them and removing any odd plants that appear.”

ALS resistance cases are starting to appear in meadow and rye bromes too.  NIAB TAG will be surveying wild oats this summer.

In additional to encouraging resistance testing, John asked the audience to consider where black-grass seed is residing, whether that’s on the surface or deeper in the soil profile.

“Are you worried about the performance of herbicides anywhere on your farm? Could that be due to seasonal factors or have you an unexpected herbicide failure?” he asked.

“Knowing where the pressure is coming from as well as where the seeds are within the soil profile, is vital information for selecting the most appropriate weed management strategy,” he explained.

“It’s why we’ve recently launched a competition where growers can win a resistance test from BASF,” adds Ali.  “With a full field report, growers and agronomists can plan more effectively – optimising cultural and chemical strategies.”

Concerned about a knee-jerk reaction following this wet autumn/winter, John had a call-to-arms: delay drilling autumn crops to mid-October.

“On average, every week drilling is delayed in autumn there’s a 15% decrease in black-grass.  We’ve not yet had a year when delaying drilling from September to October hasn’t reduced black-grass plants.  Even in those years with low rainfall,” observes John.

Summarising 16 field trials where drilling was delayed for a month, John concluded: “On average there was two thirds reduction in black-grass.”

“Highest levels of control were achieved where there were high levels of rainfall between the early and late drilling dates.  Where there was low rainfall before or around the first drilling date black-grass germination was suppressed and control reduced. There was no correlation with dormancy-forming conditions in weather data around Wimbledon.”

The messages were reinforced by the results of a joint BASF and NIAB trial at Hardwick.  “You can drill mid-September and apply Crystal (flufenacet and pendimethalin), Hurricane (diflufenican), Lexus (flupyrsulfuron) and Avadex (tri-allate), or wait 3 or 4 weeks until mid-October and just apply Crystal (flufenacet and pendimethalin), and get the same outcome.”

“You can’t spend your way out of early drilling,” John concludes.

As a side note, John showed the impacts of delayed drilling on rye-grass across a range of cultivations. “Delaying drilling help to control a whole basket of grass-weeds. Again it’s not just the opportunity to control germinating grasses before the crop is drilling, but optimising control from pre-em herbicides.”

Monitoring is key to the long-term management of black-grass.  Knowing how much black-grass there is and where it is in the soil profile guides cultivations decisions.

“If you’ve no fresh seed return this year – think about the seed bank,” advices John. “One season of good control isn’t enough of a reset.”

Drawing on another trial at Hardwick, John demonstrated how cultivations effect black-grass numbers. Where there’s fresh seed on the surface, ploughing reduced head counts by 80-94%. Where all the black-grass was in the seedbank, inverting the soil produced 34-40% control.

“Where you’ve good control this year, with little fresh seed on the surface, direct drilling the next crop is likely to produce the greatest control. By keeping black-grass seed deep within the soil profile for longer, you’ll reduce germination and let the seed-bank degrade.”

When it comes to spring crops, a further reduction in black-grass can be obtained from delayed drilling.  The difference between planting in mid-February and mid-April was around 80 plants/m2.

“However, there is a trade-off with crop performance,” acknowledges John. “The “sweet spot” was around mid-March, where black-grass seedling were reduced to nearly 40 plants/m2 with the spring oats yielding nearly 6t/ha and spring barley, 6.5t/ha.”

Highlighting the effectiveness of spring cropping, John compared the number of black-grass planted between autumn and various spring drilling date. The result was profound with black-grass plants reducing from nearly 700 per m2 with a September/October drilled crop, to less than 100 with a February drilled crop.

“While the black-grass counts can be reduced further by delaying spring drilling, the very act of spring drilling has the most significant impact. It’s a highly effective technique for reducing black-grass, decreasing populations by 70%-80%.”

“Every week drilling is delayed, the probability of good grass-weed control is going up.”

“Not all grass-weeds are as affected by spring cropping though – Italian rye-grass, bromes and wild oats, for example. Yes, there are reduction of plants in the crop, but the overall effect isn’t as profound as it is with black-grass.”

John rounded up the presentation with a powerful graph demonstrating the potential cost of relying on herbicides alone.

“Always think beyond control in the current crop.”

“70% control is relatively cost-effective to achieve with herbicides. It’s getting that 97-98% control, where you’re sustaining or reducing populations, that becomes disproportionality expensive with herbicides alone,” he says.

The graphs – which is based on real data from all NIAB TAG trials – shows how 97% can require a programme costing £300/ha.  Relying predominantly on pre-ems with an autumn applied contact herbicide.

“It’s not just black-grass, with all weeds we mustn’t become over-reliant on herbicides. Effective management comes from all the whole system.”

It’s a point Ali wholeheartedly agrees with: “cultural controls are an essential element of any effective weed management strategy.  Once resistance has developed in a weed species, it cannot be reversed. And it’s expensive; think beyond the herbicide spend on this crop but throughout the rotation. We lose yield in each subsequent crop and reduce the longevity of active ingredients.”