In his latest Fieldwise Live video updates, the firm’s environmental services manager Bob Bulmer demonstrated some of the environmental features that had been put in place at the two Helix demonstration farms in Northamptonshire and Suffolk, where improving the sustainability of arable systems was a key area of research. 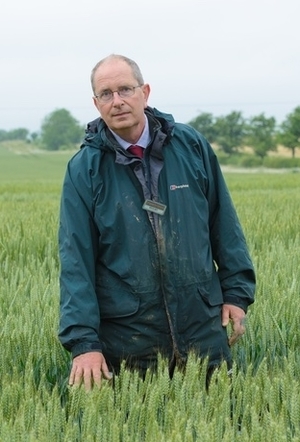 Stewardship options discussed in the latest video updates included an annual spring-sown plot to provide food and foraging for wild birds during the winter “hungry gap” and a “spectacular” pollen and nectar mix designed to provide a summer habitat and food source for pollinators; both of these options are available within the existing Countryside Stewardship Scheme.

The pollen and nectar mix at the Helix East Demonstration Farm, was established two years ago and this season sits next to a winter wheat agronomy trial. It looked particularly impressive in the fine weather experienced during May, as the main species – notably Oxeye Daisies (Leucanthemum vulgare) and Red Campion (Silene dioica) – were in full flower, attracting a range of pollinators including honey bees, butterflies and hoverflies.

“We’ve also got other species, such as Wild Carrot (Daucus carota) and Black Knapweed (Centaurea nigra), waiting in the wings that will flower later in the year to provide that continuity of supply that you need for pollinators,” Dr Bulmer said.

He added that the feature was a good example of how farmers could “stack benefits” from stewardship options.

“We’ve got a fantastic resource for pollinators and biodiversity generally, but it is also located next to a ditch and a hedge, with a footpath, so it’s providing some protection from farm operations and demonstrating compliance with pesticide legislation. There’s also a clear distinction between the cross compliance area and the environmental feature.”

In terms of locating stewardship options, Dr Bulmer said growers ideally needed to look at putting them on difficult to manage areas, such as by squaring-off awkward field corners or tricky areas around in-field obstacles (e.g. trees, telegraph poles), or locate them on unproductive land, including heavier, difficult-to-manage soils, or areas with poor drainage, for example.

“One of the ways you can do some analysis on that is to use the gross margin calculation from Omnia, which uses yield mapping to produce a cost for each part of the field so you can look at the unproductive areas, which ironically are often the better areas for wildlife because it creates a mosaic of habitat for them.”

A further benefit of the pollen and nectar mix observed at the Helix East Demonstration Farm was the suppression of black-grass, noted Dr Bulmer.

“This area used to be a real problem area for black-grass and now, after two years there’s hardly any in here.”

After the regular round of summer crop demonstrations had to be cancelled due to the coronavirus pandemic, Hutchinsons set up the Fieldwise Live Hub to ensure growers can stay informed about what’s happening at our national and regional trial sites.

The hub features video updates from 16 Regional Technology Centres around the country and is being updated continuously throughout the season.

Catch up on the latest videos and those from earlier in the season at www.hlhltd.co.uk/fieldwiselive