The USDA’s latest forecasts for global supply and demand were released on 9 March. These estimates largely reversed last month’s actions, when global 2016/17 ending stocks were trimmed for wheat, maize and soyabeans.

The main theme running through the report was the impact of bigger crops in the Southern Hemisphere, particularly for South America. For instance, emerging favourable reports from Brazil’s ongoing soyabean harvest, as well as positive yield and planting developments for maize, prompted the USDA to boost their output figures.

The Brazilian soyabean harvest is around halfway completed and very good yields led to a 4Mt increase in 2016/17 output projections, to 108Mt. For maize, favourable conditions have raised production expectations for the first crop and planting of the second crop has got off to a rapid start, according to the USDA. Brazilian maize output was lifted by 5Mt to 91.5Mt.

Similarly, the 2016/17 world wheat balance was boosted by bigger than previously expected Argentine and Australian crops. 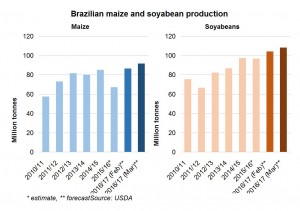 This piece was supplied by Brenda Mullan, Market Intelligence at the Agriculture & Horticulture Development Board