The finalists of a new award, celebrating on-farm environmental, societal and financial sustainability activities, have been announced.

Colin Chappell from Gander Farm in North Lincolnshire, and Guy Prudom of Northfields Farm in North Yorkshire were unanimously selected by the judges, following an open application process.

Mr Chappell and his family farm on the banks of the river Ancholme where they own 400ha of predominantly arable clay land, with some permanent pasture. They contract farm a further 160ha of sandy soil, 120ha on a tenancy agreement, 80ha for a neighbour and has recently taken on a further 60ha of arable land.

The mid-tier environmental scheme includes wildflower strips such as the one found alongside his seed barley crop. He believes this approach gives a home for all the “mini-beasts”, insects, birds and wildlife, as well as allowing him to commercially farm, delivering a profit to the bottom line.

Mr Chappell’s focus for the last two years has been nitrogen and reducing inputs, using pulses and OSR in the rotation to help maintain natural levels within the soil. He is continuously monitoring his soil and carbon, and reviews each field on an individual basis. He is also a keen advocate for the Bentazone Stewardship campaign and works with the local water company to monitor levels and ensure he is not applying the herbicide in a high-risk zone. 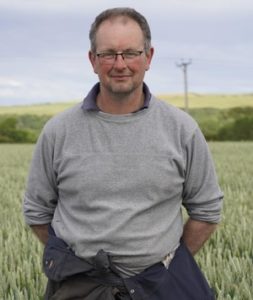 Guy Prudom farms in partnership with his parents, renting just over 400ha, predominantly from the Mulgrave Estate. The main enterprise is a lowland arable unit where they also finish suckler cattle. Within their arable rotation, they grow 90ha of OSR and winter wheat as cash crops, with the remaining 70ha consisting of spring oats, winter and spring barley, and spring beans which are fed to the finishing cattle.

They believe in trials, and experiment regularly with different crops and varieties to ensure they are growing the best option for the soil and their profit margin. This year they are growing a field of spring beans and peas in a mix together, as well as a mixture of spring barley and oats.

Other trials include five years of precision soil testing, and two years of organic matter and calcium. Their additional two units, High Burrows and Davison Farm, are both upland permanent pasture where they run a paddock grazing system, to help maximise grass use and minimise fertiliser requirements.

Commenting on why he entered the award, Mr Prudom said “It adds justification and gives us confidence that what we are doing here, is right. We have got through to the final and that has shown the whole team, from my parents to the contractors, agronomist, vets and consultants, that we are on the right track to a sustainable system. It’s not just for my personal gain, it is for everyone involved.”

Both Colin and Guy have a strong commitment to social sustainability and have participated in AHDB Monitor Farm programmes sharing their experience with their peers whilst also welcoming feedback, and implementing systems to improve their businesses. They look closely at benchmarking and utilise data to support their decision-making, as well as investing in the next generation, welcoming school groups, and local clubs to their farm.

To select the winner, the judges visited both of them to see their sustainability activity in action and learn more about their future plans. Commenting on the finalists, BASF Agricultural sustainability manager, Mike Green said,

“They both demonstrate a long-term commitment to sustainability, looking at a whole farm approach. They are continuously assessing and reviewing their practices and invest time in trials and data, so they have a clear understanding of what works best for their landscape.

“All the judges were impressed by their passion for the environment, whilst also demonstrating a focus on financial stability and the willingness to adapt their operations to meet the changing needs of the industry.

“I am delighted that in our first year we have two incredibly strong candidates, and look forward to welcoming them to our awards celebration in July.”

The Rawcliffe Bridge Award is organised by BASF, in partnership with Farm 491 and the Institute of Ag Management. It was launched to coincide with BASF’s biodiversity and advocacy work with the Hinchliffe family at Rawcliffe Bridge, which this year marks 20 years.

The winner will receive a bespoke ceremonial plate at BASF’s 20th Anniversary celebrations, a free ticket to the Institute of Ag Management’s annual conference, and access to the expert network run by Farm491.