In a context where climate disruptions throughout the year have led to a decrease of the sown area for winter crops, the latest figures published today by Copa and Cogeca confirm that EU-28 wheat production has dropped by 13.6% and that the yield for oilseed rape remains very low at 17 million tonnes. Below this overall situation lurks a wide disparity between producers and regions. Even more concerning is the fact that with current market prices producers cannot cover production costs and farms are increasingly facing cash-flow difficulties. 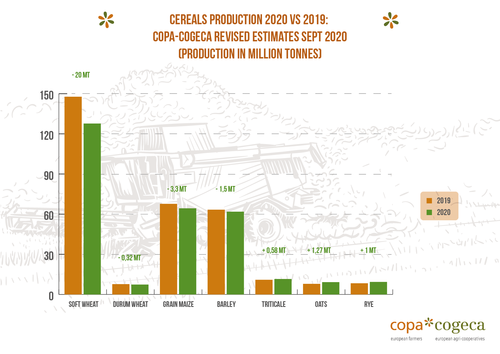 The latest forecast by Copa and Cogeca shows that EU-28 soft wheat production is shrinking, with an average decline of 20 million tonnes (-13.6%) compared to the 2019 harvest. This drop is mainly due to the bad weather conditions and the increased presence of insect pests and diseases, which are ever harder to combat.

“It is essential to address these issues by providing efficient risk management tools and ensuring that at least 60% of first pillar payments are allocated to CAP basic payments. If farmers aren’t provided with the necessary funds to buy cereal seed and quality inputs, the EU’s cereal balance could be impacted even further, increasing the pressure on available supply” Jean-François Isambert, the chair of the cereals working party, warned.

The European farming organisations confirmed that the quality of the soft wheat harvest is up to expectations in most regions, but regulatory restrictions on the usage of fertilisers and their rising prices (anti-dumping) give grounds for additional concern.

For oilseeds and protein crops, overall EU-28 production is below 30 million tonnes, with oilseed rape production very low at 17 million tonnes, despite a slight increase compared to the previous year. At the same time, prices for high oleic sunflower have dropped by 30% compared to 2019 due to the sluggish world market and a decreased demand for cooking oil as a result of the Covid-19 pandemic. It is thus important to ensure that palm oil and its high ILUC-risk derivatives cannot be used for certified sustainable biofuel in the EU, and that subsidised biofuels such as B99 from the US do not weigh down the European market.

Biofuels derived from European arable crops, which contribute to the fight against climate change and reducing the EU’s dependence for protein-rich co-products, must be governed by a stable policy. According to Pedro Gallardo, “some European sunflower producers are now considering to just give up on this crop”. The chair of Copa and Cogeca’s working party on oilseeds and protein crops went on to say that “it is indispensable that we rethink the European approach to approving plant protection products if we want to avoid producers of oilseeds and protein crops abandoning a crop that is a pivotal element of their crop rotation system, which benefits livestock producers and contributes to maintaining biodiversity, because it is simply not profitable.”

Copa and Cogeca support the view that farmers should be able to use plant protection products and effective fertilisers on Ecological Focus Areas if the EU has any ambition to ramp up its plant protein production.