Every cloud has a silver lining. If there’s a positive to be found in those clouds that brought chaos to drilling last autumn, it’s been their impact on weed control.

Talking with BASF’s agronomy managers around the country it’s clear, where pre-ems were applied, they performed well.  Where drilling was delayed, growers took the opportunity to spray off chitted weeds and gain further control. Only those that drilled but did not get to apply pre-ems have struggled to hold the line with grass-weeds.

Post-ems are a different story, with weather severely distributing applications and some products facing some robust weeds, performance has been more varied.

Despite the challenges, most crops are looking relatively clean, giving growers an opportunity to maintain or further reduce populations heading into the 2020-2021 season.

Harvest has started in Kent and Essex and though there have been reports of some big yields, I think that’s a special case. We’ll know more next week,” says Jonnie Dennis, BASF agronomy manager based in Kent

“Herbicide performance in cereals crops was really good. Black-grass and rye-grass populations are noticeably down on previous years, with fewer seed heads above the crop in June.”

“Many growers didn’t want to start drilling until mid-October for black- and rye-grass control but this proved impossible in many cases,” he says. “Anything established from October onwards was put into poor, waterlogged seedbeds.  These crops didn’t tiller well and head counts are lower as a result.”

“Anyone with a bad black-grass problem was waiting to drill, which didn’t happen, forcing them into sowing spring crops.  While this is frustrating, it has meant better control,” acknowledges Mr Dennis.

“Many chose spring barley or spring wheat and both look ok. The rain late April saved a lot of these crops.  But because of the dry weather, most growers didn’t put a pre-em on; the weed burden is higher than you’d expect in a spring crop.”

Further north, winter wheat has improved as the season’s progressed.  “More rain late spring/early summer has helped crops green up and given a bit of hope for reasonable yields,” says Mathew Barnes, BASF agronomy manager for the North West and Yorkshire.  “Most are on the turn now, though there was huge variance in drilling date so harvest is likely to be prolonged.”

“In general, weed control has been adequate in many cereal crops lucky enough to see a whiff of chemistry”. The major issue has been a result of the wet laying soil overwinter.  While it improved herbicide performance in some circumstances, it’s given crops a hard time. We’ve had late germinating wild oats, and reports of groundsel and shepherds purse coming now, which is nuisance as it’s too late to treat them.”

“With all post-emergence applications going on in spring applications – there’s variable performance to say least.  We’ve at lot of black-grass hiding below the canopy.”

“Another week or so and growers will be starting to combine,” says BASF’s Matthew Keane.   “One or two have already started on those early drilled, early varieties sown on lighter land.” 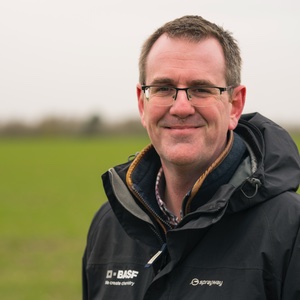 “In parts of Norfolk and Suffolk, the rain in spring came just in time, saving yields. It’s a bit early to start predicting t/ha but they are certainly looking better than we thought they might earlier in the season.”

Considering last autumn, crops are generally looking quite clean in the east of England. “Where growers managed to get pre-emergence and early post-emergence herbicides on, they have done a good a job.”

“The season has certainly focused minds regarding drilling; where crops have been muddled in less than ideal conditions with rain preventing timely herbicide applications, it’s put too much pressure on the later post-emergence applications. The lesson has been clear: if you’re not going to be able to apply pre-em in good time, don’t drill.”

“Black-grass hasn’t liked the conditions this year either,” notes Mr Keane.  “It’s noticeably less vigourous and in some cases, short.  It’s hiding beneath the canopy.  Currently it’s mid-way through shedding and there’s still an opportunity to gather seed for resistance testing.”

Rye-grass is becoming an increasing issue in some places in Norfolk. “Germinating throughout the season, in some ways it’s harder to deal with than black-grass,” says Mr Keane.

“At home we’ve applied a pre-em stack of Crystal (flufenacet and pendimethalin) with diflufenican and Defy (prosulfocarb), together with the post-ems, have performed well.  There are some populations showing signs of resistence which means we’re thinking about rotations, introducing spring cropping, as well as other cultural controls.”

“In recent years there have increased reports of groundsel and this year is no different. As we’re changing our cultivation approaches and timings, we’re bound to select for different weed species. Min-till is likely to be favouring weeds like groundsel.”

Though badly affected by the wet weather, the story in the Midlands is broadly similar to that elsewhere.  “Because of the enforced delayed drilling, black-grass populations aren’t looking too bad,” observes Aliona Jones, BASF agronomy manager for Lincolnshire, Nottinghamshire and Derby.

“Though some found themselves in the nightmare situation of having drilled early, not being able to get the pre-ems on and having to spray off crops.”

“Crops are well into senescence, but it’ll be a couple of weeks before growers are truly into the harvest.”

“We’re still someway from harvest, but on the whole crops are looking well and have the potential for good yields,” says BASF’s agronomy manager for Scotland, Scott Milne.

“Herbicides in the main, have done their job.  They’ve performed well on our main weed, annual meadow grass, and tidied up bromes and rye-grass – though these are becoming more of an issue.”

“Many crops went in and established well. Though, there are some which didn’t get a pre-em, only a late post-em which has been harder on crops, knocking them back.”

While this year has been extremely challenging to say the least, it’s highlighted the impact of delayed drilling and timely pre-ems on black-grass control. Both are essential where populations are high.

She points to a recent webinar on the Real Results Virtual Farm, where NIAB weed biology specialist, John Cussans, drew on data from a joint NIAB and BASF trial at Hardwick. He observed how many active ingredients were needed to compensate for early drilling:

“You can’t spend your way out of early drilling,” John concluded.

It’s a point well-worth remembering as we start thinking about next year.