A new hybrid winter feed barley being launched this autumn, which combines high yield with high grain quality, could hold particular appeal for growers in the north and the west of the country, as well as on heavier land, says its breeder.

SY Thunderbolt, from Syngenta, is new on the AHDB Recommended List (RL) for 2021/22, where it has a UK treated yield of 107% of control varieties and a grain specific weight of 69.6 kg/hl, says Syngenta seeds technical manager, Paul Roche.

But as well as its headline figures, Mr Roche says its consistent yields of 107% across all UK regions, combined with it being one of the earliest maturing varieties on the AHDB RL, could make SY Thunderbolt a particularly attractive option in the north and west regions. Further data available on the AHDB RL also shows it has the highest yield figure on heavy soils, at 111% of control varieties, he points out.

“We know that winter barley matures several weeks later in the north,” says Mr Roche, “so early ripening is important here, as well as in the west.

“An early harvest also helps to spread summer workloads and gives an opportunity for early cashflow. It is also especially useful if following barley with oilseed rape.

For growers on heavy land which is typically favoured by black-grass, Mr Roche says the combination of the top yield figure of SY Thunderbolt on heavy soils and the ability of hybrid barley to suppress black-grass with its hybrid vigour, means SY Thunderbolt looks a good fit in this situation as well. Hybrid barley has also been shown to suppress ryegrass and brome, he says, and competes not only through its vigorous growth above ground but also through its vigorous roots. 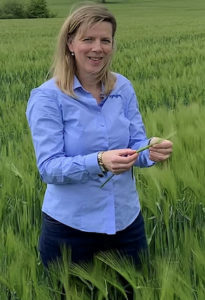 “The return on investment from feed barley is very attractive at current grain prices. However, recognising the challenges that growers face, we will be maintaining the 2021 seed price for hybrid barley at the same level as last year,” Mrs Hughes concludes.