Speaking at this season’s Syngenta Potato Science Seed & Soil Pathogen webinar, he pointed modern planters are capable of operating at far higher speeds, compared to traditional cup planters. “That could compromise the consistent incorporation of spray in the soil target zone around the mother tuber with the original sprayer set up on the planter, along with potentially resulting in the risk of drift at the higher speed,” he warned.

With the essential role of Amistar for control of both black dot and Rhizoctonia pathogens in the soil, three years of Syngenta trials had investigated new nozzle technology, water volume use and the set-up of nozzle orientation.

Mr Fordham pointed out the original brass AZ in-furrow nozzle – which is no longer available – did have a very small orifice producing fine droplets susceptible to drift. Some of the alternatives trialed included hollow cone technology to give a wide band of application to cover more of the soil at speed, along with larger orifice less prone to blockage and drift.

Results of the trials have shown the Lechler TR80 had performed consistently well over successive seasons. The set-up recommended was with two nozzles, one at the front and a second at the rear of the planter shoe, to spray the soil as it falls back in to cover the planted tuber.

With the research repeatedly showing application at 100 l/ha producing the best results for both crop yield and tuber quality, compared to 50 l/ha, the TR80 was operated with an 015 nozzle in both situations, he reported.

The other combination which showed good promise from one year of trials was a set-up instigated in Germany, using two Lechler FT90 nozzles, set up to deliver 33% of the spray at the front of the shoe, by fitting at 01 sized nozzle, and 66% at the rear on the closing soil, through an 02 nozzle.

“The relatively large nozzle orifice would be unlikely to block. More interestingly it is a pre-orifice nozzle design, so offers some level of drift reduction and may be a combination to consider, especially with higher speed planters,” he advocated. 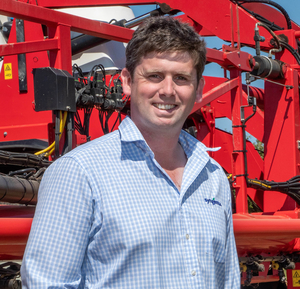 Mr Fordham reported that in all the Norfolk trials, undertaken in a field specifically selected for the high risk of soil borne black dot, the use of Amistar reduced the incidence of severe infection on the harvested tubers. Results were also improved disease control for silver scurf and greater marketable yield from all the Amistar application techniques.

Syngenta Potato technical manager, Michael Tait, had warned research had shown that black dot (Coletotrichium coccodes) was proving extremely persistent in soils, along with some indication that the pathogen is involved with the early die back complex that is being increasingly reported in potato crops.

“Microsclerotia of black dot can typically persist in the soil for eight years or more, which means that once established it can usually survive from one potato crop to the next in the rotation,” he said. The pathogen is favoured by warm, wet conditions often associated with changing climate.

“We have seen very good results from Maxim seed tuber treatment, to prevent transfer of seed-borne pathogen onto the daughter tubers. But with this disease now so prevalent in soils, growers and agronomists need to be looking at the combination of both Maxim and Amistar to manage its damaging effects,” he advised.

The combination of seed and soil borne controls was also especially effective in countering Rhizoctonia black scurf, Michael suggested. Dutch trials had shown that Amistar in furrow and Maxim seed treatment individually had each effectively halved the calculated Rhizoctonia index – a measure assessing both the severity and incidence of infection – from 16 in the untreated to 7.5 or 8 respectively. When the two products were used together, however, the index was further significantly reduced, to just 3.