The UK bean crop is set to hit a new high of 200,000 hectares this season, buoyed by a strong market, on-going issues with alternative break crops and big cost savings from legume crops that eliminate the need for expensive nitrogen.

Speaking at the PGRO/Syngenta Pulse Webinar last week (27 Jan), James Maguire of KWS and President of Pulses UK reported that good contracts are available now for harvest ’22 beans, with sufficient seed available to fulfill a sizeable increase in the spring sown market.

“Bean yields held up well in 2021, at around 4 t/ha, when other spring crops had not performed so well,” recalled Mr Maguire. A good year for exports, combined with strong domestic demand for protein in animal rations, would indicate only a small carry-over of stocks this harvest.

“The industry is predicting an increase in the exports for both the human and animal feed market next season,” he added.

“It’s disease control gives excellent results against both rust and chocolate spot, the two key diseases that can have serious impacts on yield,” he advised.

Repeated years of development trials have consistently shown improvement in yields in contrasting seasons of hot, dry conditions – conducive to rust – or cool and humid weather where chocolate spot prevails.

Research has recently focused on providing advice bespoke to UK field conditions. “Growers have just one permitted application from growth stage 51, at a rate of up to 0.66 l/ha. That means deciding where to put it in the programme, and the most appropriate timing,” he said.

Trials undertaken by PGRO and Syngenta in-house researchers had confirmed the most effective programmes used Elatus Era as the first spray, typically followed by Amistar at the later timing.

When conditions indicate rust is exclusively the target pathogen, trials suggest the application rate for Elatus Era could be reduced to 0.5 l/ha, he suggested. “The trial results from 2021, where chocolate spot was more prevalent, have shown that rates should be kept up at the full 0.66 l/ha, to give the best results and increase margin.”

For application timing, the trials have shown no advantage in an earlier T0 treatment, compared to the conventional T1 and T2 treatments. First treatments are best made with the crop at the beginning of flowering to 40% of flowers open (GS61-65), with the second treatment at the end of flowering (GS69). “That is typically mid to late May, and then in mid-June,” he added.

PGRO trials in 2021 had seen an increase in grain size and weight with the full rate Elatus Era, followed by Amistar, compared to the current industry standard. The trial also showed an indication of Elatus Era activity on Stemphylium in the crop.

A first season of PGRO trials on combining peas in 2021 looked to evaluate the use of Elatus Era, which had shown excellent control of powdery mildew from a single application, even though the disease is not currently on the label.

Mr Tait also pointed out that Elatus Era has an approval for use in linseed, where trials in the maritime zone of France, akin to the UK, had shown good control of Septoria and mildew under high disease pressure.

“The key insights from all the Elatus Era trials has been the outstanding control of rust and chocolate spot, with efficacy in winter and spring beans,” he reported.

“It offers growers better value for money against both pathogens, compared to the current market leader, and is the ideal partner with Amistar in a two-spray programme in field beans.” 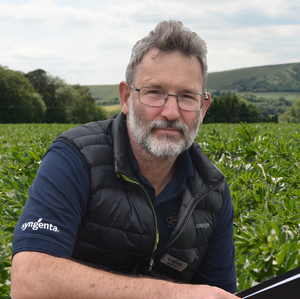 Intercropping beans with a cereal crop – be that mixed, in alternate rows or in strips across the field – has shown to reduce disease pressure in both crops, reiterated PGRO agronomy researcher, Dr Christopher Judge. The technique also offers weed suppression and greater resilience, because if seasonal conditions affect one crop, the other may compensate.

Where bean seed rates are reduced with intercropping, compared to a monoculture, the lower plant population could reduce disease pressure, suggested Dr Judge. “There is also a barrier effect of the companion crop interfering with spore movement, along with an adaptation of the microclimate within the crop less conducive to specific diseases.”

In mixed crops of spring beans and oats levels of bean rust were reduced by at least 50%, compared to monoculture beans. Good results had also been recorded in strip cropping of beans and oats, as well as alternating rows of the two crops. However, Dr Judge pointed out that in the 2021 trial the beans had performed particularly poorly and the oats were more dominant to compensate.

“Further intercropping trials are planned to assess the overall impacts on the production of pulses that would indicate any potential improvement over growing the crops separately,” he reported. It also has potential within future environmental and carbon capture schemes, but these are not without their challenges, the speakers acknowledged.

With pea midge, for example, she reported periods of high pest pressure had hitherto only been considered to occur for a few days on any one site. However, with 2021 trials of new monitoring techniques in Yorkshire, populations above threshold levels were seen to occur for at least two weeks and, in one instance, up to a month on the same site. “The recommended timing of insecticide application, such as lambda cyhalothrin, was still valid – but may need to cover a longer period of above threshold activity.”

The pheromone trap systems for pea and bean weevil was also being assessed, to check the effectiveness of available pheromones. The threshold of 30 weevils per trap remaining the trigger for treatment. Application was a priority for more susceptible crops at or around the time of emergence, +/- 10 days, she advocated.

For more precise decision-making, Dr Howard emphasised the importance of on-farm monitoring of a range of pulse pests, to tailor actions and applications on a field-by-field basis. PGRO has also been trialing and positively assessing the potential for automatic camera traps, for pea moth and other pests, to identify and assess the numbers in the field daily.

PGRO principal technical officer and variety specialist, Steve Belcher, reported just one new winter bean had been added to the Descriptive List for 2022 – Pantini – and no new spring beans. Although lower yielding than some other beans, the early maturity and shorter, stiffer straw could make Pantini suitable for wetter or more fertile areas of the UK, he suggested.

Growers looking for larger, bolder bean size, among winter varieties, Vincent has by far the highest 1000 grain weight, at 804 g/’000, that is over 100 g higher than any other on the list. For spring cropping the variety Macho had the largest beans at 688 g/’000. Also notable was the consistently higher protein content of La Cartouche, at 29.1%, reported Mr Belcher.

“Fortunately, there’s no shortage of new varieties coming through for trials, with five new peas, five spring bean and four winter bean varieties in evaluation this season,” he added.