A study of trends has shown it is temperate climates, including the UK, that are bearing the brunt of some of the extremes in weather changes. Nationally there has been a significant shift to higher temperatures, with the 10 hottest years on record all occurring since 2000, for example.

However, analysing weather data on a more local level can indicate crops that are most at risk of heat stress, and how to adapt agronomy to cope, advocates Syngenta Head of Technical, Dave King.

“Weather data not only highlights the areas subject to high temperatures, but the detail shows when heat stress has hit, and the duration plants were subject to its damaging effects,” he reported.

“What we are seeing is that some areas, primarily in the eastern and southern counties, are getting hit year on year. However, the timing and the severity of the impacts can be significantly different each season.”

Virtually all areas of the UK do experience heat stress events at some stage of the season. Growers and agronomists need to look at the frequency they occur and the intensity of the heat event to assess risk to crops, advised Mr King.

The longer the duration of a heat event the greater the impact on crop production, compared to a short higher temperature, he suggested.

Results of the UK’s largest ever biostimulant field study with Quantis last season, proved that the stress mitigation it provided under the effects of heat delivered significantly higher potato crop yields. 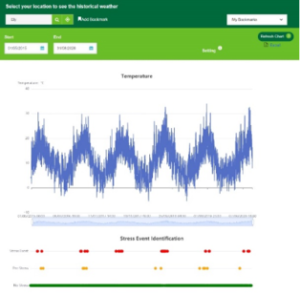 In 30 independently assessed field trials that were subjected to leaf temperatures of 25⁰C for more than four hours on 14 days during a period from the onset of tuber bulking to the end of August, the average yield response from a three-spray Quantis programme was 2.2 t/ha.

Reviewing weather data for an area such as the Cambridgeshire Fens, for example, revealed that temperatures that would impact on potato crop performance during that period has occurred every season for the past six years (above, left).

The frequency that it has occurred has varied from the lowest of eight days in 2015, up to 32 days in 2018 (above, right). On average over the six years, crops would have been subjected to the damaging heat stress conditions on more than 15 days each season.

“Using this information gives growers and agronomists a clear indication of where they should focus agronomy on heat stress mitigation,” he advocated.

“It also shows, that with the seasonal variability of when heat stress can occur, the importance of preparing the crops’ resilience to the effects of heat by building Quantis into the programme throughout the tuber bulking phase.”

Mr King pointed out that temperatures at crop height will typically be higher than modelled for weather records, and within the canopy with little air flow could rise even further. “That could be having even greater impact of plant health and its ability to cope with stress,” he warned. 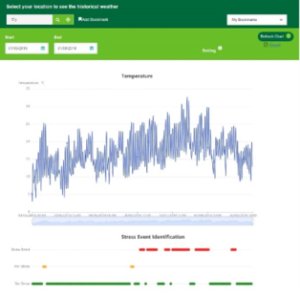 15⁰C to 20⁰C, with a fall off when temperatures exceed 20⁰C.

Plant physiological studies that indicate where potatoes are under the effects of oxidative stresses, such as heat, they are unable to assimilate photosynthates, including sugars and carbohydrates, from leaves down into tubers. In fact, they may even be drawing on plant reserves to counter the stress factors.

Syngenta Global Technical & Plant Phenotyping Manager, Nathinee Ruta, warned that can cause a yield reduction in both the number and size of tubers, along with the consistency of quality. “That’s where the heat stress relief of Quantis is targeted to minimise the damage.

“The major components of Quantis are organic acids, which includes sugars and organic acids, amino acids and some nutrients. With these components, the product is equipped with anti-oxidant properties,” she said.

“These anti-oxidant effects are crucial to minimise the toxicity caused by reactive oxygen species (ROS – known as free radicals) in cells in plants under abiotic stress.”

Biostimulant specialist Dr Ruta pointed out the strength of Quantis lies in its relatively high proportion of short chain carbon molecules, which are particularly effective at helping the plant to prevent the creation of ROS during periods of stress. Furthermore, it helps with the scavenging of accumulated ROS, to minimise their adverse effects.

“By filling the organic carbon gap when a plant comes under heat stress, it can activate and enhance the plant’s natural capability to adapt to heat stress, to prevent damage and minimise its effects to protect tuber yield.

“The multi-function approach to stress relief in potato plants gives the potential for higher yield and better tuber size under heat conditions,” she advised.