A recent survey of 400 British arable farmers who all grow winter oilseed rape, conducted by the Kleffmann Group, reports that 8.3% of the winter oilseed rape crop this year has failed and that there has been a small swing back to conventional/open pollinated varieties.

Roger Pratchett of Independent Business Resource Limited, the UK agent for Kleffmann, says winter oilseed rape growers have had a few questions to ask themselves when considering the place of this crop in their rotation.  “Rape is still important as a different crop to satisfy the Three Crop Rule and remains a very useful break crop for weed control purposes, but its yields are variable and it is attacked by cabbage stem flea beetle, which in the past has been responsible for destroying crops early on. The average yield of rape at 2016 Harvest according to DEFRA was just 2.6/t/ha (compared with 3.5 t/ha in 2015) and even if you take the increased price of rape into account, this makes it less profitable to grow. Growers have also remarked about the increasing input costs which impact negatively on gross margins,” he says.

His figures indicate a significant reduction in the overall area of winter oilseed rape drilled this autumn, down to 557,000 hectares. The area likely to survive to Harvest 2017 is now expected to be as low as 511,000 ha’s, with 46,000 ha’s lost to date.

Nationally 8.3% of the crop originally drilled has been lost primarily due to flea beetle and in the Eastern region especially a lack of moisture to aid establishment. This was combined with the loss of neonicotinoid seed treatments and the effect of slugs. This matches the crop losses by area;  “For example in the East 17.9% of the crop has been lost this autumn and in the South East 15.3%. The survey did not pick any crop losses in the North East or Scotland. If you impose the distribution of Cabbage Stem Flea Beetle over this data, there could be a correlation.” Roger says. 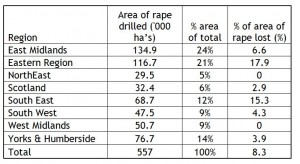 The grower survey in GB indicated that 51% of winter oilseed rape is now conventional or open pollinated varieties, with 49% being hybrids. “This means that conventional varieties have bounced back in the market. In 2016 conventionals made up just 47.5% of the total rape crop and in 2015 they accounted for 45.6% of the total.  In 2017 in the Eastern Region 72% of the rape area drilled were conventional varieties. Conventionals make up less of the region crop in the South West (48%), in the West Midlands (44%), in the North East (also 44%) and Scotland 22.5% however. Overall the most popular individual varieties grown across the UK in alphabetical order are Campus, DK Extrovert, DK Exalte, Elgar, Incentive and Picto, DK Extrovert being the most widely grown hybrid. Clearfield varieties are now making some inroads, too” reports Roger Pratchett. 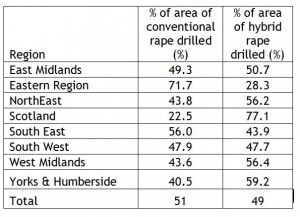