All early sown cereal crops have already passed 170 day degrees since emergence – the trigger point for aphid control to prevent the imminent secondary spread of BYDV.

It comes at a time when aphids are actively on the move, in higher numbers than some reports, combined with testing that revealed over a third of aphids were carrying virus. Together with the shift to earlier drilling this season, it’s a high-risk scenario for BYDV, warns Syngenta technical manager, Dr Max Newbert.

“It has been one of the highest years on record for aphids. The numbers of grain aphid being caught in suction traps were above average, and crucially bird cherry aphid – the other key vector of BYDV – have been picked up in water traps on Syngenta monitoring sites from the south coast, to eastern counties and at highest numbers in Scotland,” he reported.

Dr Newbert pointed out that the very heavy rains and winds of Storm Aiden only slowed the migration, with little or no apparent effect on aphids already in the field.

“Delaying wheat drilling until after mid-October could significantly reduce the risk of BYDV, as well as grass weeds. But after the experience of last autumn most growers elected to plant earlier this season,” he reported. “With warm soils the crops have emerged quickly, and the higher temperatures have seen day degrees rising rapidly.”

The figure of 170 day degrees from crop emergence has been calculated as the point when aphid activity will start the serious secondary spread of virus foci in the crop. It is calculated using local weather data on a field by field basis in the BYDV Assist App, which has shown to be triggered in two weeks or less with recent conditions. 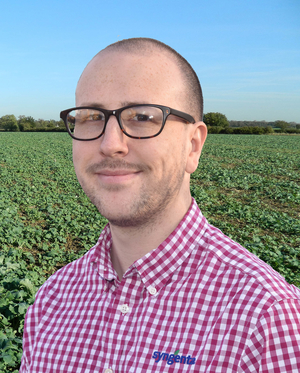 “Once BYDV infection has occurred the damage is done; the earlier it occurs in the crop, the more deleterious it will be,” said Dr Newbert. “Given the levels seen in testing it’s important to assume that aphids are carrying virus and protect crops from infection.”

He advocates timely applications of Hallmark has proven the most effective option, including against cereal aphids showing pyrethroid resistance. The product’s inclusion of titanium oxide also offers increased persistency in autumn months, that can give over 20% better efficacy compared to other lambda-cyhalothrin formulations.

Even where BYDV resistant varieties are being grown as part of an IPM approach, he advocates aphid populations are controlled. The aim is to both protect yield and reduce the risk of virus strains evolving to break the genetic resistance traits.

Dr Newbert believes that using the most effective insecticide, applied at the right time as indicated by the BYDV Assist App, gives the best chance to target aphid populations. That would reduce the need for further applications required if control had not been so good, thereby reducing overall insecticide use.

As temperatures cool into November and beyond the day degrees target will extend, and later emerging crops will be less susceptible to aphid pressure and BYDV infection. Growers and agronomist should assess aphid pressure risk as and when the later 170 day degree trigger points are hit.