An independent assessment of the value of research taking place at crop science organisation NIAB has revealed an 18-fold return on investment to the wider UK economy.

The economic impact report, by Donald Webb of Brookdale Consulting, concluded that for every £1 spent on research at NIAB, at least £17.60 is returned to the UK economy through improved production efficiency, economic growth, import substitution, export earnings and inward investment.

The report indicated that this return on investment would be even greater if NIAB’s international contribution had been accounted for.

The study focused on the following five key areas of R&D to capture the broad spread of crop-related science and innovation now covered by the NIAB Group:

In each of these five case study areas, together accounting for around 20% of NIAB’s total research income, the report identified a high-level of ongoing actual impacts as well as potential future impacts, reflecting NIAB’s unique interconnecting role between fundamental science and practical application.

These case studies also highlight the broad range of routes through which NIAB today is delivering socio-economic value and impact, including the provision of statutory services to the plant breeding and seeds sector, developing innovative agronomy solutions for potato growers, breeding market-leading soft fruit varieties, supporting growth in the UK’s emerging vineyard sector, and supplying new traits and germplasm to support genetic improvement in legumes. 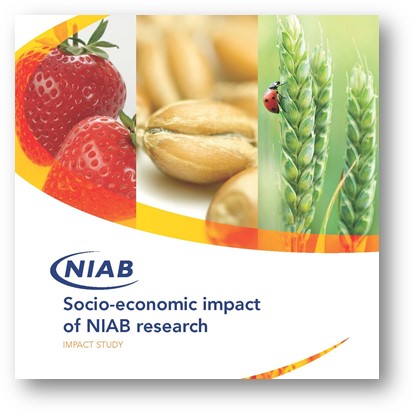 “The 18-fold return on investment identified compares very favourably to any other research-based organisation in the agriculture sector or beyond. In addition, our study concluded that NIAB’s critical mass of skills, facilities, networks and expertise has a strong contribution to make to future challenges including climate change adaptation and resilience, sustainable intensification, economic growth and food security.”

Welcoming the report on behalf of NIAB, which commissioned the study, chief executive Dr Tina Barsby said: “Last year, NIAB marked its centenary having originally been established as a charitable trust in 1919 with the aim of improving UK crop production through better varieties and seeds. Over that period NIAB has pioneered the internationally recognised systems for plant variety testing and seed certification which have underpinned the growth and success of modern plant breeding and crop production.

“NIAB is still widely recognised for its founding role in varieties and seeds, which continues to this day. But as this impact report demonstrates, more recently NIAB has successfully adapted and diversified from its position as quasi-Government institute to become a leading international centre for crop science with a broad and expanding portfolio of near-market agricultural research.

“At all levels, the focus of NIAB’s applied research activity is to improve the productivity, efficiency and resilience of UK agricultural and horticultural crop production. This independent study provides a resounding thumbs-up to the value and impact of our research,” finished Dr Barsby.