LG Skyscraper has joined an elite group of varieties that have topped the Recommended List for three successive seasons. Only three other varieties (KWS Santiago, Oakley and Glasgow) have achieved this feat since 2004, showing how impressive this achievement is.

“Whilst newer varieties have joined the Recommended List since LG Skyscraper‘s recommendation in 2018, the variety continues to dominate and demonstrate its ability to achieve the very highest yields across a wide range of situations and environments,” says Tom Barker, Limagrain’s cereals and pulses product manager.

“The variety still sits as the highest yielding variety in the East at 105% showing that it is a variety for the more testing eastern climate, associated with higher temperatures and drought.”

“The variety does this as it develops a good foundation in the early season, which it then converts into a consistently top yield of sound bold grain.”

“It is a high tillering variety that moves early in the spring, similar to Evolution and is relatively early to mature which is useful, particularly for growers in the North,” he says.

Agronomically, LG Skyscraper has held up well he notes. “Its rating for yellow rust has held fast when many around have fallen, and its brown rust is still an acceptable 6. It also offers Orange Wheat Blossom Midge resistance (OWBM).” 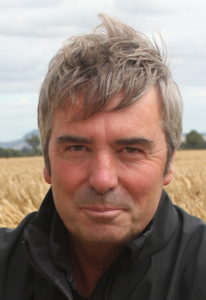 “Not only has the variety held onto its yield, but its excellent quality attributes remain intact, offering a specific weight of 76.8 kg/hl and a Hagberg of 214,” notes Limagrain’s arable technical manager, Ron Granger.

“The variety has the additional benefit of distilling, with premiums being offered by some millers for inclusion in biscuit grists – a very valuable attribute,” he says.

“For some growers who are still looking to drill their wheat, it is worth noting that in Limagrain trials, LG Skyscraper was the highest performing variety in the late drilled slot. In fact, the variety has shown itself to take this top position over three very different seasons,” he points out.

“LG Skyscraper can be drilled comfortably up until the end of January and even later into February further North, but seed rates will need to be adjusted accordingly.”

Caring for soil structure and growing on land with residual fertility has paid dividends for Berwick-on-Tweed based grower Rod Smith of Beal Farm, whose 400ha land overlooks Lindisfarne (Holy Island).

Grown on heavy clay soil after vining peas, his 2020 seed crop of LG Skyscraper yielded 13.4t/ha, with a specific weight of 80kg/hl and a germination between 97-98%.

“The crop was planted on September 20, just before the weather broke, and established very well.”

“The previous crop of peas had been harvested at the end of August and the trash was incorporated, and then a stale seedbed created to flush weeds.”

“We do not have a black-grass problem in the area, but brome needs managing.”

“A lot of work has been done on improving soil structure and organic matter on the farm, and a really good stale seedbed was created using min-till.”

The approach at Beal Farm is to generally follow a min-till strategy with rotational ploughing, approximately one year in six.

“The farm follows a wheat-based rotation with vining peas, which are planted approximately one year in six to one in seven, but also includes winter oats, spring barley and increasing use of cover crops. The plan is now to try and grow more second wheats.”

“As we are in a coastal area, there is a threat from early yellow rust, which we addressed at T0 with cyprocanazole and Septoria tritici protectant chlorothalonil (CTL). We did not see any infection on the LG Skyscraper at all.

“T1 disease levels remained low, however, given yield potential and wanting to increase Septoria protection, we used an SDHI/Epoxiconazole based treatment, albeit at a reduced rate, and again CTL whilst we still had it. This was timed well to protect leaf 3.

“When it came to T2, because of dry weather, crops seemed to shut down for a while and slow down growth, so the gap was a bit longer.

“Given the yield potential, we tried some of the new Revysol fungicide on the final leaf but given rust was still lingering in the area, we also included a Strobilurin.

“T3 was really just a treatment to cover Fusarium as weather had started to break a bit and we considered that the robust flag leaf fungicide will have covered foliar disease, so it was a low dose of Prothioconazole and Tebuconazole.

The PGR (chlormequat) was also applied at T0, he adds.

“We were pushing for yield, so we applied an early N dressing. Although LG Skyscraper is a tall variety, it is very responsive to PGR.

“This was particularly clear on our own Simpsons Malt trials, where it was side by side with an untreated crop.”

In the spring, the crop got going ahead of the other wheats on the farm, so David applied a high dose of N and S to keep the crop tillering and then further N/S to meet yield potential.

This autumn, the area grown with LG Skyscraper has gone up to 160 ha as well as planting it as a second wheat in the same field as this year.

Mr Smith says: “Growing a profitable seed crop of LG Skyscraper has been really important to us, and the work fits in with our diversification projects which include a restaurant and camping site on the farm.”

Mr Cairns says: “As a company, it is our biggest selling variety because the farmers are happy with it as a first and second wheat.”

Pre emergence based on Pendimethalin, DFF and Flufenacet

Diversification projects known as The Barn at Beal