The Hobson family has successfully completed Phase III of the development of its high-tech grain cleaning, drying and storage plant, from BDC Systems and Irish Grain Services.

The Hobson’s farm 570 ha of winter wheat, rye, milling oats and oilseed rape, spring barley, beans, camelina, and herbal leys, at Warrenstown Farm, in County Meath, Ireland. However, according to David Hobson, who farms at Warresntown Farm with his father John and brother Robert: “Previous wet harvests and no control over green grain prices meant that investment, to improve productivity and efficiency of our grain handling process was imperative; a grain dryer was essential.” Thus, Phase I of the cleaning, drying and storage plant’s development began.

Phase I of the development included a 27tph Svegma continuous flow drier, a Soby aspirating pre-cleaner and a Zanin rotating drum cleaner, housed in a specially constructed building.

Grain is fed into the plant via a Skandia curved intake chain and flight conveyor with a six-metre intake set almost one and a half metres below the level of the tipping trailers to provide ample wet grain intake capacity and pre-drier storage. From the intake, grain is sent directly to the Soby aspirating pre-cleaner via a belt and bucket 60tph Skandia elevator to remove any light dust and chaff; a 30m Cimbria belt conveyor then transports the grain to the store.

From the Soby pre-cleaner, grain can be sent either directly to the grain store or to the Zanin drum cleaner, and then to the Svegma drier. Alternatively, grain can be cleaned only or dried only. The Svegma drier can also re-dry grain that has not reached the required moisture content and can be used as a batch drier. 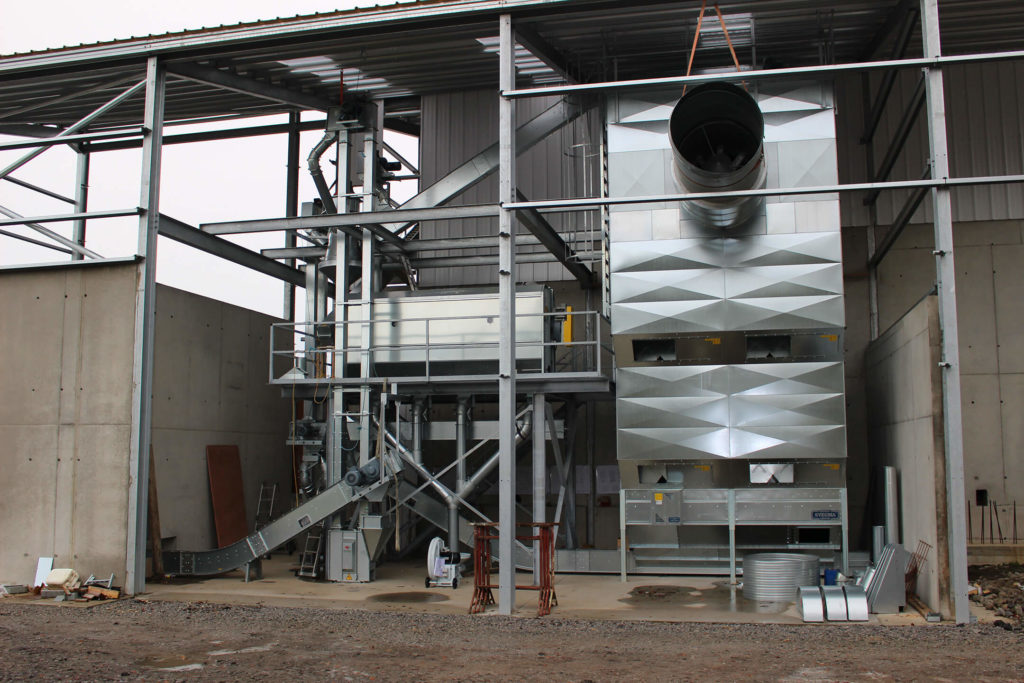 Mr Hobson said that the Svegma drier was a crucial part of the family business: “It has allowed us to increase our contract storage business, which includes working with multiple grain merchants in the east of Ireland, and storing and handling imported feed material for grain traders.”

He continued: “It has also opened up avenues for us to market grain to our customers. Most of the grain that we handle is sold either directly to pig and poultry users or to feed mills for the manufacturing of feed rations for livestock farmers.”

The Zanin rotary drum cleaner has also furthered the revenue streams on-farm, as it has four interchangeable screens to suit individual crops and sample requirements. Therefore, adds Mr Hobson, “Not only can we clean our own crops, we can clean everything from oil seed rape, hempseed and camelina seeds, to beans, grown off farm to be contract dried.”

The successes of Phase I brought with it engagement from BDC Systems and Irish Grain Services, to progress with Phase II of the plant development. With that came an additional five 60tph Skandia chain and flight conveyors, connecting the plant to two further grain stores.

In Phase III, an additional three 60tph Skandia chain and flight conveyors were installed, to transport grain to the store from across the yard – negating the need for a transport trailer.

“We chose the Svegma, drier, Soby pre-cleaner, Zanin drum cleaner, and Cimbria and Skandia handling equipment, as recommended by BDC Systems, because of the firms knowledge and expertise within the sector. Because we handle a variety of crops, BDC Systems’ advice was invaluable,” said Mr Hobson. “The complete system has proved to be robust, reliable and easy to operate.”

“Anyone looking to upgrade their existing grain handling facility or build a completely new plant can do no better than to talk to BDC Systems and Irish Grain Services,” concluded Mr Hobson.

Journalist. Graduated from the University of Sussex with a degree in English and Art History. When not working I can be found riding my horses on the Ashdown Forest, reading, shopping, or cooking!