Winter barley plays a key role as an entry crop for grass for Warwickshire-based farmer Nigel Hollick who has a mixed grassland and arable farm.

The main business prioritises a herd of pedigree Limousin cattle and North Country Mule sheep, with the arable part of the farm playing an important supporting role providing straw for the livestock and a saleable cash crop.

He grows one cereal crop on the farm each year, and his rotation includes first and second wheats, followed by winter barley, followed by five years of grass ley for grazing. This year it was the turn of winter barley.

“As cereals are not our principal business, we were looking for a barley that is easy to grow with good straw, and can pretty well look after itself without too many expensive chemical inputs,” says Mr Hollick. 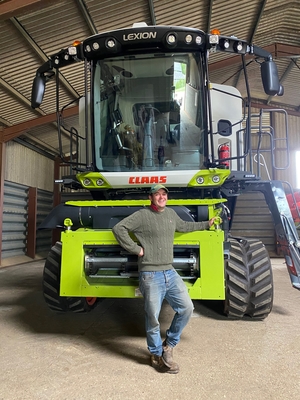 “Winter barley is particularly useful to us because it is harvested earlier than wheat, so we have time to harvest it, bale the straw, do one pass and then wait to check any chitting, cultivate and plant the grass at the optimum time of mid to late August.”

This year he has planted 20ha of the winter barley variety LG Mountain and he reports the crop looked good from the start, and does not appear to have been affected by the very wet winter or the dry spring.

“It was recommended to us by our Nickerson Seeds representative, Florentina Badiu, because of its ability to yield well, strong straw, and disease resistant profile, and we are really pleased with it.

“Coming into harvest it was a nice even crop.  We managed to get it harvested between the 13th– 19th July and we are very pleased with the 8.3t/ha and we also got 4.2t/ha of baled straw.

The farm was predominantly arable and sheep until 2007 when pedigree Limousin cattle using French genetics were introduced, and the clay loam soil has been cared for thanks to regular applications of manure from the cattle for many years. All cultivations have been min-till for more than fifteen years.

Nevertheless, the 2019-2020 season still challenged the soils to the limits; following the very wet winter, was a very dry spring and the clay loam soil became very dry and hard on the surface.

Mr Hollick admits that at one stage he became concerned for the barley crop because the ground was so bone dry it was like a vice around the plant stems.

However, he reports, that the barleys roots had already grown down deeply enough to scavenge for water, reducing the stress.

The extreme weather also affected inputs; and he comments that, unlike many growers, he was able to get a pre-emergence herbicide applied before the wet autumnal weather closed in.

“We were lucky because it went on in the final few days when you could travel.”

As the weather then went to the other extreme and became really dry  he decided not apply a plant growth regulator (PGR) and despite high winds in the area since then, there have been no issues with the crop lodging.

“The problem with cereals is that we are so dependent on the weather for quality and yield, so it is important to have a variety capable of withstanding stress.

He adds that key factors he takes into account when choosing his cereal varieties include yield, vigour and disease resistance.”

Mr Hollick goes on to remark that he grew oilseed rape as part of the rotation for a number of years. However, as one of his priorities is the provision of good straw for the livestock, this, in addition to the challenges since the withdrawal of nicotinoid seed dressings making oilseed rape very difficult to grow, influenced his decision to change the rotation to include winter barley.

He goes on to mention that grass fields are divided; some are used to provide grazing, whereas other fields are cut for silage for home-use.

“The time our land spends under grass ley is beneficial for the soils.

“This is because planting grass provides a good break from cereal crops and their necessary chemical applications, which helps pesticide resistance from building.”

Florentina Badiu, seed specialist at Nickerson Seeds says: “The  requirements of this particular farm highlight the importance of an early variety which is clean, has good tall straw for livestock use in addition to a good specific weight.

“We recommended LG Mountain because is ideal in this situation thanks to its earliness and strong, tall straw, plus its grain has a high specific weight and it mills very well.”